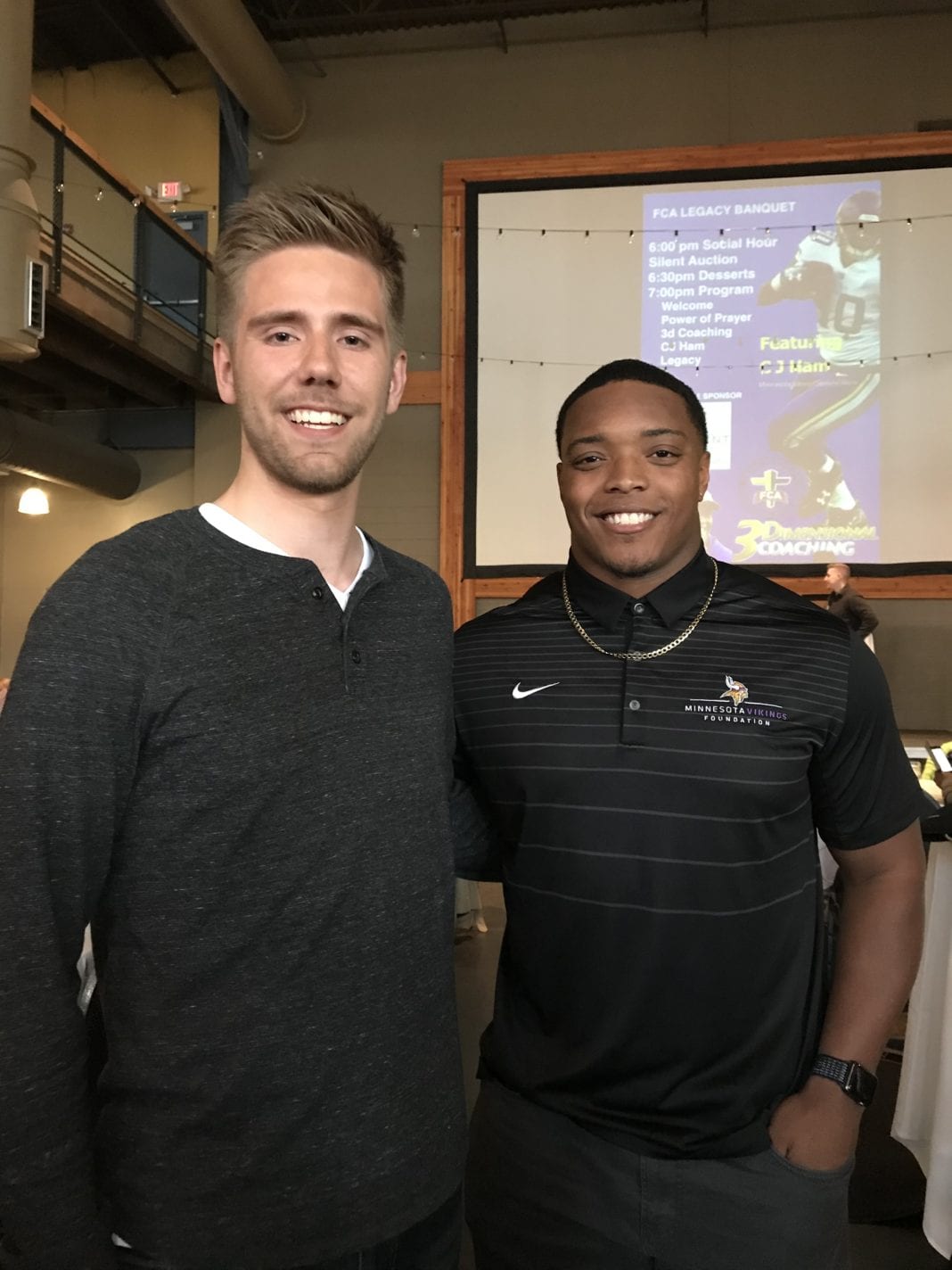 C.J. Ham may not be the face of the franchise for the Minnesota Vikings, but he’s a hometown hero in Duluth, Minnesota. I too am a Duluth native, and I had the unique opportunity to meet the fullback when he spoke at a banquet for the Fellowship of Christian Athletes.

Duluth is two hours north of Minneapolis, and it’s one step short of the arctic tundra. As a hockey town, it’s the last place you’d expect to produce a professional football player, although Bud Grant grew up just a mile away in Superior, Wisconsin.

Like his teammate Kirk Cousins, C.J. is the son of a minister who credits his success to family and faith. The 5’11” blocker was raised in a blue collar neighborhood and is a rare success story to come out of Denfeld High School.

Ham regularly visits his parents who still live in Duluth, and on friday he stopped by his former high school to see a mural that was created in his honor. A quote from C.J. on the artwork reads, “Growing up in Duluth’s West End, you work hard and earn everything you get. It’s 100 percent possible to reach your dreams, and dreams really do come true if you are willing to work for them.”

In high school, Ham ran track and fell in love with football. His days at Denfeld earned him an opportunity to play college football in South Dakota, where he ironically became a Viking at Augustana.

C.J.’s transition to college wasn’t easy. As an overwhelmed freshman lacking a good friend group, he briefly stepped away from the sport he loved most. “I quit football… packed up, and came back to Duluth,” he admitted. His absence from Augustana didn’t last long, as his close-knit family and supportive community encouraged him to go back to the gridiron. After returning to Augustana, Ham ran for over 2,600 yards and tallied 35 touchdowns. As it turned out, college wouldn’t be the last time he played for the Vikings.

Even though Ham has gone pro, people from his past say he hasn’t changed. IST Crossfit owner Chris Bell used words like “appreciative” and “humble” to describe Ham at the banquet, who used to frequent Bell’s Duluth-based gym. As a Minnesota Viking, Ham has proven to be a talented fullback who can block well and run through defenders, but what I admire most about him is his character. C.J.’s mother was diagnosed with pancreatic cancer a few weeks ago, and Ham immediately rushed home to give her a hug and tell her how much he loves her. That’s the kind of guy I want in the locker room.