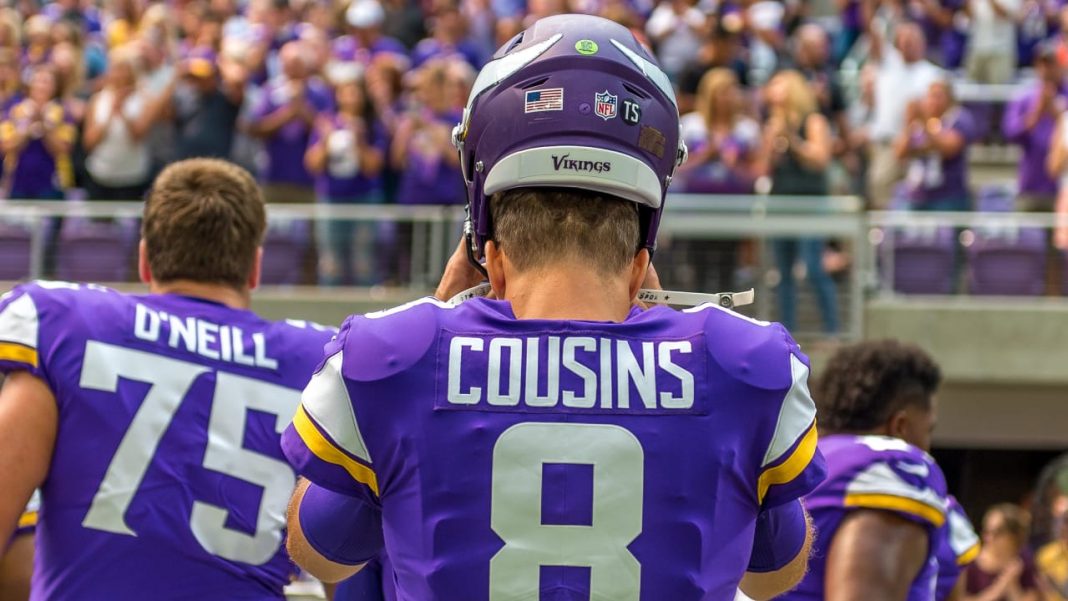 Picture yourself going on a blind date.

Some friends set you up on it, and you’re a little nervous because you’ve had bad luck in the past, but you’re finally ready and willing to get back out there and play the field.

You get to the restaurant about 15 minutes early and have a drink at the bar to calm your nerves.

Just after finishing your second old-fashioned, she walks in. And she’s beautiful.

You two instantly make a connection: the conversation is flowing, you have similar interests, and her career history is nothing short of impressive. The night couldn’t have been more perfect.

She invites you back to her place for a drink, and you accept.

While in the kitchen getting a glass of water, you go to the refrigerator for some ice and whoops – there’s a human head in the freezer.

Welcome to the life of a Minnesota Vikings fan living with Kirk Cousins under center.

Cousins has been a fantastic quarterback on paper: a two-time Pro-Bowler who has gotten better with age.

Those are fantastic numbers.

But there’s something you just can’t look past — the human head in the freezer — and it’s his record in primetime games.  And that primetime record has been an unavoidable stain on his otherwise impressive career.

If the Tom Bradys, Russell Wilsons, and Aaron Rodgers of the quarterback world perform like a symphony in high-pressure games, then Kirk Cousins is the 10-car pileup during rush hour traffic.

To refresh everyone: Cousins’ regular season primetime record is 6-16-1. Yikes.

In fact, Cousins has lost so much in primetime that researchers were able to find a new mental disorder associated with being a fan of the team he is on.

“The 5 Stages of Cousins”

First, comes denial. “There’s nothing he could have done, the other team was just too good.”

Followed very, very quickly by anger. “Why the hell did the Vikings sign him to such a big contract? Now we are stuck with this bullshit!”

Bargaining. “If only Teddy would have sat out of practice that day, we would be in so much better shape right now.”

Depression. “Why was I born in this state? Why do I care about football this much? Am I cursed?”

And finally, acceptance: “Cousins may struggle in primetime, but he’s our quarterback and the entire team needs to step up to cover the slack.”

But I, the open-minded one, have found the answer to get you past those 5 stages, and possibly avoid them all together.

You see, contrary to popular belief, his 6-16-1 record is not nearly as bad as it looks, and I have the numbers to prove it.

The Human Head in the Freezer

Because of his unfavorable prime time record, Cousins has gotten a reputation as a “choker”.

That is a lazy, uninformed opinion.

Has he been perfect? Of course not. Every quarterback has a few slip-up games, and you certainly don’t get to 6-16-1 without a few slip-ups.

But contrary to popular belief, Cousins performs better in primetime.

In this article by PFF entitled “Kirk Cousins is at his best when the whole nation watches”, they write that Cousins doesn’t deserve his reputation.

We, as Vikings fans, can look back at certain games throughout these past two years and pinpoint the type of performances this article highlights.

On Week 4 of the 2018 season, the Vikings travelled to Los Angeles to face off against the Rams on Thursday night, eventually losing 38-31.

On Week 13 of the 2019 season, the Vikings travelled to Seattle on Monday Night, eventually losing 37-30.

If you take away the “interception” Cousins threw at the start of the fourth quarter, which inexplicably bounced out of Stefon Diggs’ hands right into the arms of Tre Flowers…..

Cousins went 6 for 13 with 121 yards and 2 touchdowns in the fourth quarter alone, eventually finishing the game with 276 yards, 2 touchdowns, and 0 interceptions (once again, taking away the “interception” from above).

These are the types of performances that pundits overlook because they are viewed as losses, no matter how well Cousins plays.

His Teammates Do What?

So, if Cousins actually performs better in prime time games, why the 6-16-1?

Let’s take a better look at those 16 losses.

Going into those games, Cousins’ opponent had a combined record of 74-43, or a .632 winning percentage. That equates to being just a little bit better than 10-6.

And in those games Cousins’ defense gave up, on average, 30.81 points per game.

Another way of looking at it is that, in those 16 losses, Kirk Cousins was facing a 10-6 team who put up 31 points.

Do you know how many teams scored more than 30.81 points per game last year? One. The Baltimore Ravens. The next closest was the San Francisco 49ers at 29.9 points per game.

Imagine going against a team that was playing like last years’ 49ers every prime time game.

Of course this doesn’t completely absolve Cousins for going 0-16 in those contests, but it’s not like he is simply choking against inferior teams.

Are the Vikings Helping?

Let’s now take a look at the regular season primetime games Cousins has faced since joining the Vikings.

There have been nine of those games, and in those games he has a record of 3-6.

But once again, let’s dive deeper into the losses.

In those six losses, the opponents’ collective record going into the game was 41-14 (.745) with the defense giving up, on average, 29 points a game.

In other words, Cousins was going against the equivalent of a 12-4 team who put up 29 points.

Are you seeing a theme here?

Yes, Cousins’ primetime record on paper is bad. But his losses come against good teams who put up 29+ points a game.

Those games are far from guaranteed victories.

So maybe, just maybe, Cousins doesn’t have a human head in the freezer after all.

Maybe he is just a little bit misunderstood.

What About the Playoffs?

Why don’t we look at the real games that matter: The games when the lights are brightest and pressure is at its highest.

Any rational fan that watched the 2019 NFC Divisional Round game against the 49ers can testify that was a collapse in all facets of the game for the Vikings. From the offensive line, to the defense, to special teams, players were just failing to execute. And you can’t fail to execute in so many areas and expect to win against a team like San Francisco.

However, the Wild Card game against New Orleans the week prior can tell us a lot about Kirk Cousins and the Vikings.

A perfectly placed 43-yard pass to Thielen? “Someone who can’t win the big games” cannot do that.

An off-balance corner-of-the-end zone touchdown pass on third and goal facing heavy pressure and 75,000 screaming fans? A “choker” cannot do that.

Perhaps it’s time to throw the lazy “Kirk Cousins is a choker” opinion away and finally come to a moment of enlightenment that maybe, just maybe, the defense should be held just as accountable as the quarterback when they give up 29+ points a game.

Is that too much to ask?

Back to your blind date:

You walk into the living room and ask, “Why is there a human head in your freezer?”

She laughs and replies, “Oh god you probably think I’m a serial killer. Remember I told you I worked at the lab on campus? We are studying human flesh decay rate in sub-freezing temperatures and the lab made life-like silicone human heads for us all to study in our homes. I probably should have told you about that, shit.”

You know you’re not quite satisfied with that answer. You know you should probably leave. But this is the best girl you’ve found in a long time, so you decide to stay.

The head is still there.

But you feel a little better about it.