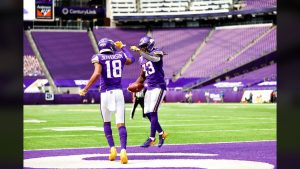 The proceedings 20 statistics about Justin Jefferson in his rookie season are not necessarily the best, most interesting, or shell-socking, but they illuminate several mathematical facts about him. Jefferson hauled in the most Receiving Yards by a rookie wideout in NFL history. That is already relatively common knowledge and is exempt from the 20 stats.

Now, head to Twitter with what is illustrated below and claim these factoids are your own.

2• No TD Receptions under 10 yards were obtained by Jefferson in 2020.

3• Every single one of Jefferson TDs occurred at U.S. Bank Stadium.

7• Justin Jefferson is the 22nd rookie WR since the 1970 AFL-NFL Merger to reach a Pro Bowl. Four other Vikings have gained this accolade: Sammy White, Randy Moss, Percy Harvin, and Cordarrelle Patterson.

8• DeAndre Hopkins had fewer Receiving Yards and TDs than Justin Jefferson in 2020.

11• If allotted Stefon Diggs’ Targets from Buffalo during 2020 (166), mathematically Jefferson would have accrued 1,859 Receiving Yards and 9 TDs.

12• By Receiving Yards, Jefferson had the most in Vikings history by a man not named ‘Randy Moss.’

13• Jefferson’s 87.3 Receiving Yards per game was the most by a Vikings player since Randy Moss in 2003

16• Adam Thielen and Stefon Diggs combined for 15 Receptions of 25+ Yards. Jefferson – alone — had 16 such catches.

18• All but one of Jefferson’s TDs were scored in Noon games (CST).

19• Jefferson averaged 110.8 Receiving Yards per game versus AFC opponents. His average dipped to 79.8 against the NFC.

20• In comparison to Laquon Treadwell, Jefferson totaled 93 times more Receiving Yards than did the Vikings 2016 rookie WR in his first year. 1,400 Yards vs. 15 Yards.