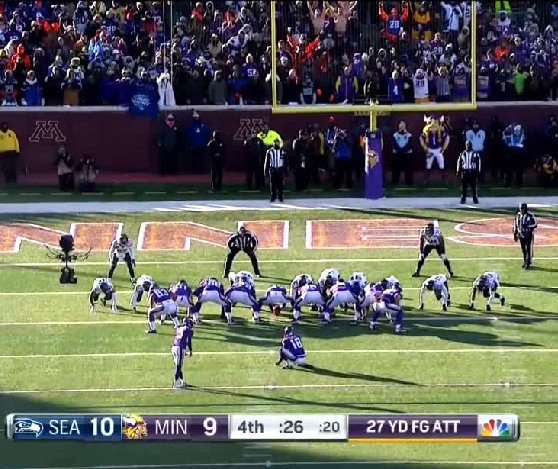 It’s not hard to see why Vikings head coach Mike Zimmer is basically at the end of his rope when it comes to his kickers. Since he took over as the head coach of the Vikings in 2014, the Vikings have struggled at the position despite spending relatively high draft picks on two kickers with big legs in Blair Walsh (before Zimmer’s tenure began) and Daniel Carlson, and the money they spent to coax the former second most accurate kicker in NFL history, Dan Bailey and whatever they spent to bring Kai Forbath in, as well. In all, between Carlson and Bailey, the Vikings missed out on 28 points (across TEN missed kicks) this season alone (not to mention Walsh’s struggles) and while it’s easy to blame the kicker it turns out that it’s not (at least entirely) on Bailey (or even Carlson, who has kicked well with zero pressure in Oakland). Vikings special teams coordinator Mike Priefer discussed this on Friday and placed the blame squarely on the shoulders, or hands, of punter and holder Matt Wile.

When asked about the woes, Priefer said of Wile:

“I don’t know if he’s ever really been taught how to hold. He has, at times, struggled with it. But he is really starting to come along and Dan (Bailey) is starting to trust him a lot more.”

This shouldn’t really come as a surprise to the people who have watched the Vikings this season, especially as it looked as if the hold was off in the past two Vikings games, games in which Bailey missed kicks that he historically had no issue making. The question then becomes how is this just now coming up? Perhaps the right questions weren’t being asked or perhaps the fault for the continued struggles at the position should fall to Priefer. Priefer was a holdover from the Leslie Frazier days and had a pretty big falling out with one of the players under his purview in Chris Kluwe, who was one of the better punters in Vikings history but ended up leaving because of the divide between his and Priefers styles/beliefs. While Kluwe was gone before Zimmer, that controversy is still a black mark on Priefers record especially considering the continued turnover at the position.  He brought in a punter to replace Ryan Quigley, who replaced Jeff Locke (who replaced Kluwe after a “competition”) that was never taught how to hold and clearly hasn’t learned how despite the fact that the season is 75% over and that you’d think that that’d be what Priefer would know before they brought him in (or, you know, didn’t bring him in).

For those keeping track, that makes three punters and four field goal kickers since Zimmer took control of the team and kept Priefer on (with Kluwe being a fourth). That’s insane. The only kicker who hasn’t really struggled was Kai Forbath, who did miss his share of extra points but was automatic from within 42 yards (or so) and who also kicked what was probably the most clutch and underrated kick in Vikings history during the Saints playoff game last season. He was let go, though, because Preifer apparently thought he could keep the field goal percentage and improve the extra-point percentage by bringing in a kicker who struggled during his senior season in Daniel Carlson. That move could be his undoing and is proof positive of his hubris (as is his apparent thought that he could teach someone in their 20’s to hold for the first time in their careers).

A lot of people have pointed to first-year offensive coordinator Jon DeFilippo when looking to figure out why the season hasn’t gone the way we all expected and while that is fair, I do believe that Priefer clearly hasn’t been able to get the most (or even the not terrible) out of his players and because of that it feels like it’s time that Zimmer and company start fresh with someone new after the season. Bailey, again, held the record for the second highest success rate at the position and if he is struggling, which he is, it’s clear that something is really, really wrong. I’d be amazed if Priefer was part of the team next year regardless of what happens the rest of the way as it’s astounding that they didn’t know that about Wile before bringing him in to replace Jeff Locke and considering that it’s far too late to fix that (outside of expecting Wile to get better), it’s probably too late for Priefer as well. That or they’ll just draft another kicker(s) for Priefer to ruin next April.