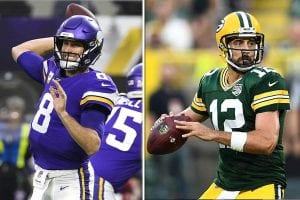 Sometimes playing the position of NFL quarterback is not rocket science. It’s about playing in the confines of an individual–and team–ability. Of late, the Vikings’ Kirk Cousins may be showing Aaron Rodgers, the uber-talented Green Bay signal-caller, a thing or two he could learn.

Stephen A. Smith of ESPN calls Aaron Rodgers the “Badman” of the NFL.

Pundits and their power rankings continue to place the Packers at the top of their lists despite a recent 37-8 thrashing by the now #5 NFC seed San Francisco 49ers. After all, they do have number 12 and his celestial arm leading them.

However, in reality, the Packers are now ranked 17th in the NFL in passing yards and 21st in total yards. The offensive “balance” that had surprised the league during its first months of the 2019 season has evaporated.

One of the reasons the Packers are struggling to beat losing teams is the play of Rodgers, who, despite making a throw or two a game only he can make, often holds the ball too long in a disintegrating pocket while attempting to do so.

As he has his entire career.

Last Sunday against Chicago, Rodgers did so again, not only to the chagrin of his new coach, Matt LaFleur, but to the point that he was found arguing with one of LaFleur’s assistants on the Packer sidelines late in the game.

Wasn’t this one of the reasons that Mike McCarthey was fired? The running game wasn’t working and the pass offense had become predictable? A brand new playbook and against Chicago and Rodgers again could be seen shaking his head about his platoon of pass-catchers missing their marks.

He also had a crucial intentional grounding call, misfired on several plays that short-circuited Green Bay drives, and took an awful sack late in the game that gave the Bears another crack at tying the game–an opportunity they missed by mere yards.

What Kirk Cousins has done best in 2019 is understand how he can and cannot be Aaron Rodgers as an NFL quarterback. He can’t move in the pocket like Rodgers, he can’t throw off his back foot like Rodgers, and he certainly can’t outrun many athletes to a first-down marker as Rodgers does.

But he surely can play the role of the quarterback better. He can recognize the times to let his offense work, throw the ball to his check-down, or even into the stands if need be. He doesn’t audible anywhere near as many times as Rodgers and doesn’t seem to get terribly frustrated when his team has to punt the football.

Is this a matter of less being more or just the cognizance that the quarterback was not truly designed to be a hybrid athlete? “He” was designed to execute the play he was given and expected to show aptitude in his part.

That means, even with their running game working, Rodgers played worse in front of the Lambeau Field crowd. Is it fair to ask what this quarterback has learned in 2019?

Cousins, on the other hand, has dispelled doubts in and out of every week from NFL talking heads like Pro Football Talk’s Mike Florio that he’s imminently going to personally ruin just about every important game he’s leading the Vikings into.

Before the Chargers game last Sunday, Florio wrote, in his familiar snide fashion, about the Vikings and their QB:

“This is a dangerous game for the Vikings, one with just enough playoff implications that Kirk Cousins could blow it.“

In the game, Cousins went a perfunctory 19 for 25 for 207 yards, while his team collected 137 yards on the ground and seven turnovers in a 39-10 blowout victory.

Florio may be picking Aaron Rodgers and the Packers against Minnesota in US Bank Stadium on Monday Night Football, but I would guess he might be in the minority on this one.

You see, ultimate success in pro football is not about having the most talented quarterback in the game, not even the most skilled group of players. It is–and always will be–about the best team playing together to win, not just watching a remarkably talented star shoot across the football field.