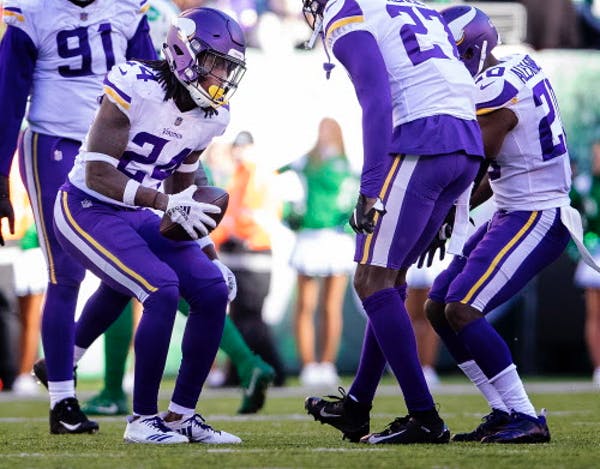 The Vikings topped the ‘Skins on Thursday night, bringing their record on the season to an apparently “Super Bowl Caliber” 6-2. After a day emailing NASA we at purpleTERRITORY Media are pleased to announce that 6 plus 2 is 8. That number might ring some bells as that means that troubled Vikings corner Holton Hill is ready to return from his eight-game suspension, which he received this off-season in two four-game increments. The first suspension was for violating the league’s performance-enhancing drugs policy where the second was for violating the league’s substance-abuse policy.

Hill has shown promise as an undrafted outside corner for the Vikings, which might not surprise many as he would’ve been a much higher draft pick if not for his off-the-field struggles while playing college ball at Texas. Considering the struggles of starting outside corners in Xavier Rhodes and Trae Waynes on the field, it’s safe to say that his return (and the fact that the Vikings didn’t cut him after his second suspension) will be applauded. That’s not to say that Hill will instantly start over Rhodes or Waynes, however, it may help answer the question as to what the Vikings are going to do at the position(s) after the season.

Vikings head coach Mike Zimmer is well known as a cornerback guru and he has been increasingly vocal about his displeasure with how Rhodes is playing. He’s said multiple times that Rhodes needs to either play better or play up to his contract, the former statement coming last week as he was interviewing Troy Aikman and Joe Buck for Thursday Night Football.

Waynes has struggled as well, but he isn’t making the elite level of money that Rhodes is, nor has he been in the system as long or regressed as Rhodes has. It was only a few seasons ago that one could make the argument that Rhodes was a top-three corner in the NFL. Now, he’s no longer anywhere near that mark and while that’s a strange way to assess the future of your defense (as the only thing Zimmer has complained about more than Rhodes’ contract to play ratio is his Pro Football Focus’ rating system), it gives you an idea as to why he may be more dispensible than Waynes, especially considering that despite the fact that Zimmer said to Buck and Aikman that Rhodes was “healthy”, that statement doesn’t really pass the eye test. If Rhodes is this banged up at 29, where will he be (physically) at 33? Also, Waynes has been mostly healthy in his career and while he’s often the target of ire from fans (and writers), one could argue that he’s been improving each season (this season TBD).

Before the start of the 2019 season, the Star Tribune did a story on the front page of its sports section discussing Rhodes’ off-season plan to stay healthy. He was stretching more and, other stuff that immediately seemed to be printed at an ironic or bad time as he looked very gimpy during the pre-season after coming off of a season in which, as he put it in the piece (or a few others like this one), was playing through at least four different injuries. On my podcast ‘Morning Joes’ as well as my Youtube show, ‘The Smoke Break’, I’ve wondered aloud if that’s just who Rhodes is now, the perpetually injured former shutdown corner who is clearly making far too much money for his output.

That (also) having been said, we’re perhaps not being completely fair to Rhodes as the defense as a whole is playing very well this season and while he’s given up some catches or touchdowns he wouldn’t have during his peak, he’s still performing well enough for the Vikings defense as a unit to be considered one of the best in the NFL. Sure, they looked really mediocre against the Lions and terrible in the first quarter against the Packers. You’d also think that as an “elite” defense they should’ve shut down guys like Chase Daniel and Case Keenum, but they’ve for the most part been very strong and are top-ten in nearly every defensive category.

That’s not to say that they can’t improve, however, and with Hill back in the line-up along with the recent return of Mike Hughes from the knee injury that cut his promising rookie campaign short, perhaps they can help keep Rhodes (and Waynes) as healthy as possible as the Vikings get near the playoffs by giving him less snap counts each week.

That’d allow the Vikings brass to see if they need to spend yet another top draft pick on the cornerback position at the end of the season to replace Waynes or Rhodes, or if they feel comfortable with what they have internally. With Waynes’ contract being up next year (as well as the contract of nickel specialist Mackensie Alexander) and the Vikings having less salary cap money than I have in my checking account, it’s clear that change is on the horizon at the position. Now that Hill is back, it’s safe to say that we’ll start to see some idea as to what that change might be… If he can stay on the straight and narrow, that is, and from what we’ve seen from him so far that might be a really big if.