Does Dede Deserve a Roster Spot? 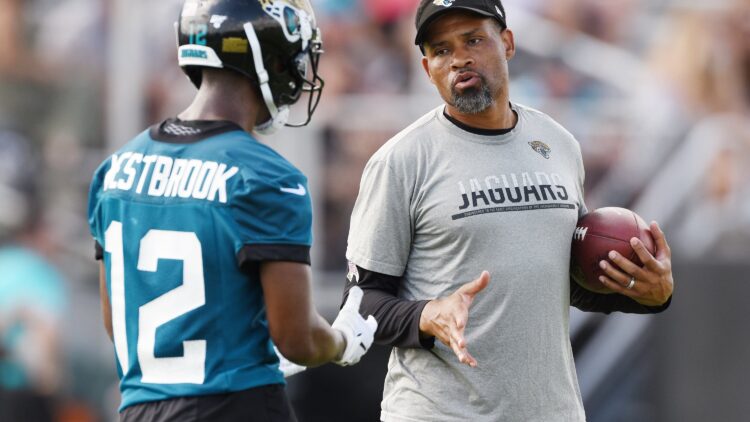 Heading into the final preseason game tonight, one of the main questions I’ve been asking myself rests in whether the Vikings can justify keeping Dede Westbrook.

There was considerable optimism among Vikings fans when Westbrook was added. I did my best to adjust expectations. A solid, but unspectacular WR was deemed by many to be the missing piece in our offense, a WR3 who could finally take some of the receiving burden off our top-flight Thielen & Jefferson pairing. Unfortunately, Westbrook’s injury recovery has seriously hampered his ability to demonstrate whether he can be this WR3.

Instead, K.J. Osborn has been the one getting most of the headlines. The sophomore WR, quite evidently, put in a lot of work in the offseason. Let’s also not forget Chad Beebe. Most fans seem ready to move on from Beebe and his Mini Miracle, but the team values what he brings. This week, Cousins spoke glowingly about Beebe’s abilities, noting that he can consistently get open against man coverage. I think he’ll be the team’s WR3 this year.

Bisi Johnson and Blake Proehl – two depth options – are done for the year. The result is a considerably thinner depth chart. It’s looking like Thielen, Jefferson, Osborn, and Beebe will be on the team. It also appears as though Ihmir Smith-Marsette will make it. Though I have my concerns (he needs to keep the ball high-and-tight!), Smith-Marsette is also well-positioned to contribute as a returner.

Can our Vikings really justify keeping 6 receives? Of Osborn, Beebe, and Smith-Marsette, who should be cut instead of Westbrook?

A recent article on Vikings.com discussed past position battles to clarify how the Vikings might proceed this year. Back in 2019, the Vikings only began the year with 4 receivers. In 2020, the number jumped to 7 because of special teams roles for Dan Chisena and Osborn. In 2021, I expect the number to land somewhere in the middle. Minnesota ought to keep 5 or 6 receivers.

The article also specifically highlights the Westbrook situation: “Westbrook is a bit of an X-factor. He has proven experience as a receiver and returner and has spent the past four seasons with Vikings receivers coach Keenan McCardell, but will he be ready for Week 1? Added just before camp, Westbrook has been working his way back from an ACL injury that cost him most of 2020.”

The old football saying is that you can’t make the club from the tub. The basic idea is that it’s pretty difficult to make the final roster if you’re hurt. Exceptions apply, of course, but the saying largely reflects the reality in the NFL.

We should all be thankful that I’m not in charge of the purple personnel. If I was GM, the team would be far worse off. That being said, it’s difficult to see Dede Westbrook justifying a spot on that initial 53-man roster. Toward the beginning of August, Minnesota released an unofficial depth chart. Westbrook was the fifth name listed at receiver, one spot ahead of Smith-Marsette.