Do we all need to pump the brakes a little bit with Teddy Bridgewater? 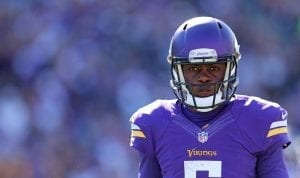 Fifteen months after suffering a gruesome knee injury that depending on who you ask could have resulted in the end of a career and even the amputation of a leg, now Teddy is back. Not just back walking, not just running, but back to football.

As of 10:30am Wednesday morning, Teddy Bridgewater was activated back to the Vikings active 53-man roster. He’s back at practice and we already know that he’ll be dressing this weekend against the Redskins serving as the team’s backup quarterback always only one play away from being thrust into his first game action since the end of the 2015 season.

Judging by the reaction on Twitter yesterday, Teddy’s activation was the second coming of Joe Montana (credit Dan Barreiro) and better yet, everybody and their mother now has 280 characters to tell us all how excited they are to have their franchise quarterback back.

How soon we all forget that last time we saw Teddy Bridgewater we were all criticizing his play. He can’t throw the deep ball…he’s not comfortable taking risks…he holds onto the ball too long…he can’t read through his routes fast enough. Those were all things that we said, I said, everybody said.

People who supported his rise to becoming a franchise quarterback argued that he was being held back. Those of the pessimistic variety would argue that we only thought he was good because we’re comparing him to that which was before him…Christian Ponder.

So what do we really have here?

The last time we saw Teddy Bridgewater playing he led the Vikings to an 11-5 record in 2015. Not bad at all, but was that Teddy or was that the Vikings? Statistically speaking here’s how Teddy’s 2015 season would compare to this year’s crop of QBs through the first eight games of the season.

Completion Percentage:
Through those first eight games Teddy had completed 64.22% of his passes. His closest statistical comparison from the 2017 season is none other than Minnesota Vikings starting quarterback Case Keenum.

Passing Yards:
Eight games in Bridgewater had also passed for a grand total of 1,670 yards or just over 208 yards per game. This year that number would be good for 23rd this season right between Trevor Siemian and Blake Bortles. To keep the head to head comparison going, Case Keenum has passed for 1,610 yards and remember he’s only played in seven games (six and a half really), that gives Case 230 yards per game passing.

Touchdowns:
In 2015, Bridgewater through less than one touchdown per game on the year, that number was represented in his first eight games also seeing him through just six scores through those games. Marcus Mariota is the only starting quarterback this season with that few touchdowns. As for Case, again through what we’ll call seven games played, he has seven touchdowns.

Passer Rating:
All of the above stats pushed Teddy Bridgewater to an overall passer rating of 83.4 through eight games in 2015. That’s good enough to put him between Carson Palmer and Ben Roethlisberger this season. Then there’s the case of Case Keenum. His numbers has pinned him on an 88.8 passer rating so far this season.

So what does this tell us? It would appear to tell us that Case Keenum is a better quarterback than Teddy Bridgewater. But as always, there is more to all of these stories than the numbers would tell us. For instance, Teddy Bridgewater might not have had the offensive line that Case has been afforded this season. He was probably also a victim of  a more conservative, less creative play calling scheme. Norv Turner was pushing out a run first offense that focused first and second on Adrian Peterson, then thirdly Teddy was allowed to throw despite being put in tougher situations to succeed.

Couple the ideas we’ve covered with the fact that none of us know how this knee injury is going to impact Teddy’s play going forward and his return should be nothing more than an exciting question mark. Sure we’re all holding out hope that Teddy’s knee injury results in some sort of Henry Rowengartner situation and he’ll be nothing short of a front runner for MVP and lead the Vikes to the Super Bowl. Reality tells us that’s rather unlikely though.

I love Teddy Bridgewater just as much as any of you, I really do. I appreciate the human that he is, what he stands for and the zest and zeal that he brings to a game that can oftentimes be super stuffy and very corporate. Still, the realist in me needs to see it before I believe it.

I hope it happens, I hope Teddy is the quarterback of the present and the future for this team, but until we see it, I’m gonna have to pump the brakes a bit if only to protect myself from being a disappointed Minnesota sports fan…again.