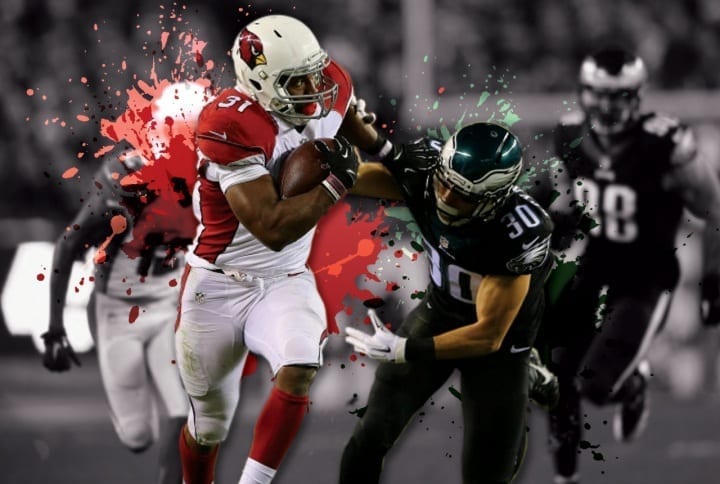 It’s the Arizona Cardinals again. On Sunday, the Cardinals fly into U.S. Bank Stadium (no pun intended) to take on the hometown Vikings. These two teams play quite often for two teams not in the same division. It may just be the Larry Fitzgerald, Jr. affect. Since the former Holy Angels H.S. star joined the Cards in 2004, Arizona (after Sunday’s game) will have played the Vikings nine of his 15 seasons—with six of those games played in Minnesota. It’s almost like Fitz is homesick.

But Minnesota hasn’t really been very welcoming to the expatriated wide receiver, as the Vikings have won six of the eight games played (all the home games plus one in Arizona). And now Fitzgerald is in the twilight of his career, so we are to wonder if this is his last trip back home with the team. Regardless, the Vikings will wary be of him.

The return of Larry isn’t the only homecoming on Sunday, as earlier this week the Cardinals signed Kendall Wright, a wide receiver who spent the spring and summer with the Vikings. The usually powerful Cardinals receiving corps is a little down this season, as Fitzgerald has been nursing a hamstring injury and the team is getting used to new personnel. In fact, Arizona’s receivers are ranked 30th in receptions (with 41), yards (467), yards after catch (135), touchdowns (two), receiving first downs (18) and targets (72). But Zimmer’s defense must still pay attention to the whole group.

“[J.J.] Nelson is a big speed guy, [Christian] Kirk is another big-time speed guy,” Zimmer said. “They’ve got a lot of weapons. [Jermaine] Gresham was with me in Cincinnati, and the other tight end, [number] 86 [Ricky Seals-Jones], is an athletic guy. Their team has a whole lot of team speed, both offensively and defensively and on special teams.”

Leading the way for the Cardinals offense is no longer a familiar face. Former Vikings quarterback Sam Bradford lasted three games as the starting quarterback before the Cards installed rookie Josh Rosen behind center. Rosen has a strong arm and is learning the game, but he led his team to their first win in 2018 last Sunday. Whereas, studying Bradford’s tendencies might have been a little easier for Zimmer, now he has a new kid to check out.

“He’s got a big-time arm, very smart, knows where to go with the football, and uses his legs to move on occasion,” Zimmer said. “He throws a really good deep ball.”

And Zimmer won’t be able to forget about running back David Johnson, who has started slowly this season but has made some hay recently. He is ranked 21st in rushing yards, but is tied for sixth in the league with four rushing touchdowns. The Vikings defense, which last week shut down the Philadelphia Eagles rushing offense, will have to do so again against Arizona.

On the other side of the ball, the Cardinals defense has some sting to it. While the defense bends—they are ranked 25th in yards against, giving up 391.0 per game—it doesn’t break too badly—it is ranked 11th in points against, yielding 22.4 points per game. The problem for the Cardinals is that the offense hasn’t helped out the defense, as it only scores an average of 13.0 points per game—thus their 1-4 record.

The Cards, with Patrick Peterson in the secondary, is still tough against the pass (ranked 13th), giving up 248.6 passing yards per game. They also have a decent pass rushing defensive end in Chandler Jones (4.0 sacks on the years). In addition, second year safety Budda Baker is fourth in the league in tackles. Overall, the Cards struggle on defense versus the run, as they are ranked 31st in rushing defense (allowing 142.4 rushing yards per game). Perhaps, this is the week, with the potential return of Dalvin Cook, that the Vikings can get their rushing game going in earnest.

Both teams come into this game after earning much-needed wins last weekend. The Cardinals got on the winning side of the scoreboard with a road win over the San Francisco 49ers and the 2-2-1 Vikings righted their listing ship with a big win over the Eagles in Philly. Each win helped their respective teams stave off potential catastrophe (for a week, anyway). The Cardinals scored 28 points, and the Vikings played defense like they had for much of last season.

Both teams have one-game winning streak coming in, which is why you can tell those people calling this a trap game—such as everyone did when the winless Buffalo Bills came into U.S. Banks Stadium a few weeks ago, and the Vikings fell in the trap—that this isn’t a trap game. The Cards are playing better (at least with a little more confidence). And the Vikings need to prove that last week’s game, which—after a 10-day break, some soul searching and some scheme simplifying on defense—wasn’t a fluke. Therefore, after the Bills game, we know anything can happen, so there is no trap here. The Vikings aren’t yet back to being good enough to be involved in trap games. Just a home team that needs to come to play and do their job and dispatch of the Cardinals.

It says here, they will.