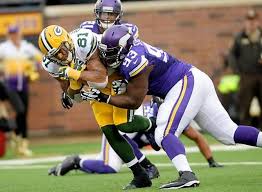 Shamar Stephen, a favorite of Coach Mike Zimmer, made his return to the team in 2019. according to the analytics Stephen is one of the most unproductive starting  three technique defensive lineman in the NFL. According to Zimmer he is one of the best at getting his hands dirty. Which one is true?

There is not a way to sugar coat Shamar Stephen’s lack of pass rush productivity. He is tied for 112th in total pressures for the 2019 season for defensive interior lineman. His backup Armon Watts was able to produce eighty five percent of Stephens stats with just fifty three pass rushing snaps or fifteen percent of Stephens total pass rushing snaps. The Eye test agrees with the analytics in this regard. Shemar offers very little in the category of pass rush.

Analytics isn’t  very nice to Stephen for run defense either. He logged only twelve run stops this pass season on three hundred fourteen run defense snaps. He was tied for sixty second for run stop percentage last season( min. 200 run snaps), and his total stops ranks seventy second among all defensive interior offensive lineman. The Vikings as a whole were solid in run defense, and Stephen does a good job keeping both Barr and Kendricks clear of offensive lineman allowing them to plug lanes and flow sideline to sideline.  He’s far from a stat stuffer, but he is able to do whatever Zimmer ask of him.

Perhaps the main reason Shamar Stephen and analytics don’t agree is Zimmer’s defensive scheme. It seems Zimmer has turned Stephen as a two gap player, and not a penetrator. In most 4-3 defensive fronts the three techniques are usually tasked with creating as much pressure as possible. Players like Akeem Hicks, Aaron Donald, and Grady Jarrett are the best at this. In 3-4 defensive fronts the interior player eats up blockers and allows the linebackers to flow freely to plug running lanes. Shamar does a fantastic job occupying multiple blockers, and is a big reason why Kendricks was the best linebacker in football last season.

Analytics will tell you that Shamar Stephen is a waste of cap space, but the film will tell you differently. He has always done what Mike Zimmer has tasked him to do, which explains why the team brought him back in 2019. While he could end up being replaced by Armon Watts or James Lynch, he is almost guaranteed to be the starter when the season begins, especially given the current delay in team activities. The pass rush may suffer from this, but Kendricks and Barr should continue to play at a very high level.