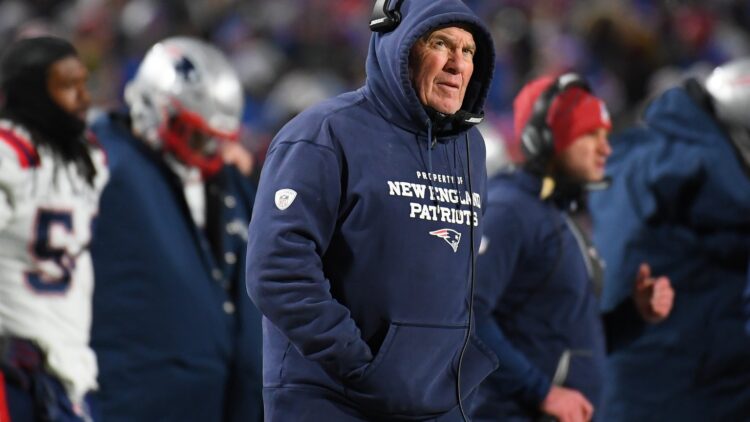 As the 2021 Minnesota Vikings season comes to a close, fans are looking ahead towards an off-season that will feature many changes. The most anticipated change is likely to be at head coach as Mike Zimmer’s tenure appears to be coming to an end in Minnesota. Although his record through eight seasons is a respectable 71-56-1, the team has only reached the playoffs three times. After their loss on Sunday night to Green Bay, the Vikings will miss the playoffs for their second straight year.

But what if Zimmer doesn’t get fired? Because he still has one year left on his contract, what if he was instead traded to another team? Coaches don’t get traded very often in the NFL, but it has been done in the past among respectable coaches. Let’s take a look at the times teams have shipped off their coaches.

Patriots Trade Parcells To the Jets

After a disastrous 1-15 season in 1996, the Jets traded a 1999 first-round pick, 1998 second-round pick, and third- and fourth- round picks in 1997 to the Patriots to acquire Bill Parcells. The Patriots were the defending AFC champions, but they still shipped the legendary coach away to a division rival.

The Jets immediately turned things around, going 9-7 in 1997. A year later, they went 12-4 and advanced to the AFC Championship Game against the Broncos. Although they built a 10-0 lead over the eventual Super Bowl champions, New York would ultimately lose 23-10.

Jets Trade Belichick To the Patriots

Yep, you read that right. Belichick was Parcells’ assistant head coach in New England, and when Parcells went to New York, Belichick joined him. After being the Jets’ defensive coordinator for three years, it was expected that Belichick would take over when Parcells stepped down. But Belichick instead announced his resignation from the job during what was supposed to be his introductory press conference as Jets head coach.

The Patriots had their own head coaching vacancy and were already wanting Belichick. So he went to New England and was hired as their new head coach heading into the 2000 NFL off-season. New York was miffed, and because Belichick was still under contract with the Jets, he was traded away along with a 2001 fifth-round pick and a 2002 seventh-round pick. In return, the Jets received a 2000 first-round pick, a 2001 fourth-round pick, and a 2001 seventh-round pick. It was, in retrospect, an absolute steal for New England and adds salt in the wound for Jets fans.

Raiders Trade Gruden To the Bucs

When fans think of head coaching trades, this is the one most will think of. Jon Gruden had just taken the Raiders to the AFC Championship in 2000 and were a Tuck Rule away from returning in 2001. The Buccaneers, meanwhile, had just fired Tony Dungy after a 9-7 season and another early playoff exit. With Gruden wanting out of Oakland, and his contract set to expire in the offseason anyway, Oakland shipped Gruden to Tampa Bay. In exchange, the Raiders received two first-round picks in 2002 and 2003 and two second-round picks in the same years and $8 million.

As fate would have it, both teams advanced to the Super Bowl in the 2002 season. Because Gruden knew the Raiders’ playbook, the Tampa Bay defense was a step ahead of the Raiders offense all night. They intercepted league MVP Rich Gannon five times, returning three for touchdowns. The Bucs rolled, winning 48-21. But neither team could recapture the magic of their 2002 seasons. Oakland wouldn’t return to the playoffs until 2016. Tampa Bay would only make the playoffs twice the rest of Gruden’s tenure, losing in the Wild Card round both times. But because of the Super Bowl win, Tampa Bay obviously wins this trade.

After the 2005 season, Chiefs head coach Dick Vermeil retired after a five-year stint in Kansas City. The Chiefs had narrowly missed the playoffs with a 10-6 record. The Jets, meanwhile, had limped through 2005 with a 4-12 record. New York coach Herm Edwards still had two years left on his deal, but the team had missed the playoffs in two of their past three seasons. The Jets didn’t ask for much in return as they sent Edwards packing, only receiving a 2006 fourth-round pick in return.

The results were far from exhilarating for each team. Kansas City never reached the playoffs in Edwards’ three seasons with the team, bottoming out at 2-14 in 2008. New York had some early success with their new head coach Eric Mangini, going 10-6 in 2006 before losing to the Patriots in the Wild Card round. They wouldn’t return to the playoffs until 2009 when Rex Ryan took over the reigns.

Also Read: The View from VT: ESPN’s QB Theory, The Return of a Mini Legend, and A PFF Mock

So Why Don’t We See Coaches Get Traded Anymore?

We’ve heard rumors about Zimmer being traded to Dallas in the past. Zimmer coached in Dallas from 1994-06, so he had a great relationship with Cowboys owner Jerry Jones. These are the kinds of connections that can lead to trades. It also takes two teams to find the right compensation while also juggling the idea of allowing their head coach to take the same job for another team.

The coaches mentioned above, outside of Belichick, were veteran head coaches. Nowadays, the trend has become hiring the hip, young offensive coordinator who has taken the league by storm. Coaching retreads don’t inspire much enthusiasm in fanbases, even if they work out in the long run (like Mike McCarthy).

With Zimmer set to turn 66 this off-season, trading him away may not be in the cards. But the possibility of the Vikings trading for a new head coach could be an option. If they believed they could find a veteran head coach who needs a change of scenery (like Andy Reid leaving Philadelphia), the Vikings could very well swing a rare, but not unprecedented, trade.