The Vikings fell to Seattle in another disappointing loss on Monday night. It was the fifth game they played against a team currently in the playoff picture and are now 0-5 in those games (Rams, Saints, Bears, Patriots, Seahawks). They are proving incapable of winning important games against good teams and each week it seems to be the same story. These were the plays that contributed this week:

Synopsis: On the Seahawks second drive, the Vikings had a chance to halt it. Linval Joseph and Danielle Hunter both had Russell Wilson trapped in the backfield. Both also whiffed on Wilson, who escaped, turning a loss of ten into a gain of ten.

Because of This Play: The Seahawks took what felt like an insurmountable 3-0 lead. These were the only points scored in the first half, and it’s likely a sack here would have kept the game at 0-0. This may have led Mike Zimmer to kick field goals to take the lead later in the game, instead of going for it on fourth downs.

Synopsis: In Seattle territory for the first time all game, the Vikings were too far away to kick a field goal. Mike Zimmer elected to go for it, and Latavius Murray ran it up the gut only to be stopped for no gain and turn the ball over on downs.

Because of This Play: The Seahawks kept the shutout alive. A conversion here would have likely resulted in points and the Vikings tying the game up. The run by Murray was an all-too familiar sight, as when the Vikings brought in CJ Ham and Murray on third down it was like telling Seattle what the next play will be. As such, the offensive line was unable to get enough push for the Vikings to convert.

Synopsis: The score still at a 3-0 standstill, the Seahawks had the ball in Vikings territory. Wilson lofted a pass deep for Tyler Lockett that sailed out of bounds, but Xavier Rhodes got too handsy and was called for pass interference to extend the drive.

Because of This Play: The Seahawks extended the lead to put more pressure on the Vikings offense. This was one of few mistakes made by the defense. With Wilson struggling all night to throw, the only way the ball was going to move through the air was via penalties. Rhodes cannot give the refs the opportunity to throw the flag in this scenario, and the inaccurate pass only added to the fact that it was an unnecessary penalty by the Vikings top corner.

Synopsis: On the Vikings only drive that exhibited signs of life, they had first-and-goal at the four-yard line. After two wasted plays, Cousins handed the ball to Dalvin Cook. The hand-off was far from a clean exchange, as Cook and Cousins ran into eachother, allowing Seahawks defensive-end, Frank Clark, to easily stop Cook from getting into the endzone.

Because of This Play: The Vikings would turn the ball over on downs on the ensuing play. Their one chance to take the lead, and potentially win this game came down to this drive. The way the Vikings defense was playing and how Seattle was unable to move the ball through the air, a touchdown could have been enough. Unfortunately, this play had no chance once Cook and Cousins botched the exchange.

Synopsis: The Vikings had great field position after a three-and-out by the Seahawks. Unfortunately, they had to settle for a field goal to cut the Seattle lead in half. Bobby Wagner vaulted himself over the line and blocked it. The refs through a flag on the play, but picked it up claiming the play was clean.

Because of This Play: The Vikings ultimately lost. Did the Vikings deserve to win this game? No. Did they Vikings play well enough to win? Half of them did. Would they have won had this been called? Probably not, but maybe. But who cares if they didn’t deserve it, a win is a win, and this call by the refs put the nail in the coffin. With all things frustrating about this game, this is an inexcusable call that very well altered the outcome of the game. A flag was thrown, which rightfully should have stayed. Not only would the Vikings have been re-kicking, but they would have had first-and-ten at the Seattle fifteen-yard line with an opportunity to take the lead. Instead, the Seahawks obtained posession and the NFL is parading Bobby Wagner around like he’s the greatest thing since sliced bread when he actually made a bone-headed play. The quote from Pete Carroll after the game that, “it was poetic after last week’s game that Bobby would get the chance to block the field goal and he pulled it off and did it. It was just an incredible play,” is like calling a basketball player who sticks his hand through the bottom of the hoop to goaltend without it being called an incredible play.  There is no explanation that the officials picked up a flag. They threw it, they saw the illegal leverage Wagner gave himself, and proceeded to pick it up anyways. It’s an inexcusable decision. I’m not mad, though. 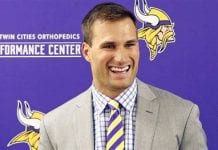