It Looks Like Keenan McCardell Will Remain a Viking in 2023

Last week, news broke that Vikings wide receiver coach Keenan McCardell had been asked to interview for the New England Patriots offensive coordinator position. After Josh McDaniels left the Patriots after the 2021 season to take over as the Las Vegas Raiders head coach, New England never truly replaced him at OC.

Instead, it was offensive line coach Matt Patricia calling plays for the offense for the first time in his coaching career. It went about as poorly as it sounds as the Patriots ranked among the bottom half of the NFL in points scored, total yards, yards per play, and first downs.

Because of that, and all the success that McCardell has had with Vikings receivers, it makes sense that he would get some buzz for this position. However, it appears that the Patriots are going in a different direction, and Tom Pelissero reported that they are expected to hire Bill O’Brien for the job.

O’Brien spent the 2007-11 seasons as an assistant coach in New England, and most recently, he was the offensive coordinator for Nick Saban at Alabama. During his time there, O’Brien spent the 2021 season coaching Mac Jones, and the coach/player tandem will be reunited at the NFL level now.

For McCardell, this coaching opportunity could have led to a reunion of his own. Back when the current Vikings WR coach was an actual NFL wide receiver, he got his career started with the Cleveland Browns. After being drafted by Washington in 1991, he missed the entire season on injured reserve and then landed in Cleveland.

During the four years McCardell spent in Cleveland from 1992-95, Belichick was his head coach, and he recorded 80 receptions, 1133 yards, and 8 TDs over the course of 80 games, including 11 starts.

Following an extremely impressive 16-year career as a player, he got his first NFL coaching gig in 2010 in Washington as their WR coach. He also had stops at the University of Maryland (where he coached Stefon Diggs) and the Jacksonville Jaguars before landing in Minnesota with the Vikings in 2021.

It’s also very well worth noting that McCardell was one of the few carryovers from the Mike Zimmer staff to Kevin O’Connell’s last offseason. That should speak volumes of his reputation within the organization and with his players. The Vikings are very lucky if they are, in fact, able to retain him for another year. His work has helped lead to great production from Justin Jefferson as well as the emergence of K.J. Osborn. 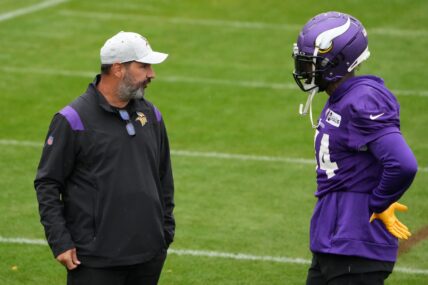