We’ve officially transitioned into the portion of the year when Vikings rumors are going to be coming fast and furious.

As a result, I’m returning to the “Vikings Rumor Wrangle,” a series I’ve leaned on previously to keep readers informed on what’s being whispered about in Vikings Land. In this iteration, we discuss the potential to bring in high-end free agents, the team potentially saying goodbye to some players, and the ongoing DC search.

Yes, Minnesota absolutely has the capacity to reel in a large fish or two.

I, for one, would be thrilled to see Minnesota pursue more defensive weapons. Adding a small army of pass rushers would certainly be a boost to whoever takes over as the defensive coordinator. Last offseason, veteran Justin Houston signed a $3.5 million deal before rewarding the Ravens with 9.5 sacks, 7 TFLs, and 17 QB hits. He did so as a rotational pass rusher who only had a single start.

Getting younger should be a priority, but adding productive players (regardless of age) needs to win the day. Keep an eye on older pass rushers who can thrive in limited roles. The Vikings finished the season with 38 sacks, 21st in the NFL.

#2 – The Vikings Will Lose Internal Talent

It’s inevitable, folks. Carrying the exact same roster from year to year is a near impossibility in an NFL with limitations on financial resources and roster sizes. The Vikings, like every other team, are watching and will watch players head elsewhere.

Dan Chisena – a remarkably fast special teamer – has signed with the Steelers. Unless he has drastically improved his receiving abilities, Chisena will be looking to convince the coaching staff that he can be a terror in punt and kickoff coverage. Blocking well will help case his case, too.

Kyle Hinton has signed a deal to help the Falcons with their rebuild.

Furthermore, the Vikings may be saying goodbye to Josh Rosen, the QB3 for the final few weeks of the season. Perhaps he’ll be back to compete for the main backup spot in 2023, but it’s far from a guarantee. To my mind, the best route would be to ink Nick Mullens to a deal. Having a strong QB2 can keep a season afloat (see: Keenum, Case).

A handful of others have also been allowed to see what the free agent market decides. Hop over to Vikings Territory to see who those players are.

Indeed, they certainly have. Their official Twitter account suggested that the interview with Ryan Nielsen (currently employed by the New Orleans Saints) has been completed.

The Vikings are also interested in bringing in Brian Flores and Sean Desai. Before it’s all said and done, Minnesota will almost certainly request (and conduct) interviews with several others. Ed Donatell couldn’t get the defense to play well, a failure that isn’t solely on his shoulders. Kevin O’Connell is this team’s head coach, so he shoulders some of the responsibility, as well.

O’Connell and Kwesi Adofo-Mensah know that Minnesota has the capacity to be a strong team but they also know that they need to nail this hire. 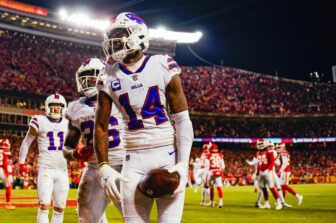