Vikings rumors aren’t as abundant as they will be in a few weeks, but there is still plenty of intrigue surrounding the purple and gold.

As a result, I’m returning to the “Vikings Rumor Wrangle,” a series I’ve leaned on previously to keep readers informed on what’s being whispered about in Vikings Land. In this iteration, we discuss the upcoming Justin Jefferson extension, Ed Donatell potentially returning in 2023, and which Vikings players could be getting to the end of their purple careers.

#1 – Justin Jefferson is Heading Toward a Massive Extension

Unless something truly unforeseen happens, Jefferson will indeed be making a ton of money this offseason.

Previously, I speculated that his deal would involve $80 million (or more) guaranteed, a lofty number that tops all other deals among NFL WRs. Of course, the season isn’t done yet, so perhaps the number can get pushed even higher. Propelling Minnesota toward an unlikely Super Bowl would certainly give the team’s leadership plenty of reason to bump that number higher.

By the end of the season, Jefferson had 128 catches, 1809 yards, and 8 TDs. Elite. He’ll play in his first NFL playoff game this weekend when the Giants come to town.

It’s hard to know how Kevin O’Connell will navigate his first full offseason as the Vikings’ head coach. His team accomplished lots of good things in 2022, but the defense was almost always underwhelming. In the end, Donatell’s bunch finished 28th in the NFL with an average of 25.1 points against per game.

Many of us likely underestimated the significance of transitioning from a 4-3 to a 3-4. Plus, several defenders started to show their age a little bit, appearing less explosive and instinctive as past seasons (the different scheme may have contributed to playing slower).

Whatever O’Connell decides, the hope probably should be that the defense experiences continuity while still getting an overhaul. In other words, double down on being a 3-4 defense while demonstrating a renewed commitment to playing aggressive, physical, challenging-to-decode defense.

Don’t be shocked if Donatell is tasked with improving this defense going into 2023.

#3 – Several Veteran Vikings May Be Nearing The End in Minnesota

Unfortunately, this one will inevitably end up being true. There’s simply no way the roster will look identical next season. Some great players will either be out of the league or playing elsewhere.

Many think of the impending cap crunch as the main impetus for moving on from some of the veterans. For instance, Eric Kendricks is going into 2023 with a cap hit just below $11.5 million; a cut would free up $9.5 million. In so doing, Kwesi Adofo-Mensah would instantly get his team a few million below next year’s projected cap. Will the team allow Kendricks to play out his deal, work toward a restructure/extension, or cut the veteran (who can hopefully elevate for the playoffs)?

Dalvin Cook, Adam Thielen, Harrison Smith, Jordan Hicks, and C.J. Ham all find themselves in similar scenarios. The NFL can be cruel; the unfortunate reality is that players who have done a ton for a team get cut in the name of increased financial flexibility.

We’ll see what Adofo-Mensah decides to do to create more financial wiggle room once the playoffs are done. 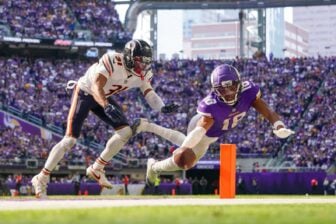