While a Kirk Cousins move in 2023 is unlikely to happen given his no-trade clause, the Vikings quarterback position remains a hot topic of discussion heading into the offseason. Should the Vikings go QB with their first draft pick? Should they extend Cousins? Should they perhaps trade for another young quarterback?

Well, the latest mock draft from Sports Illustrated’s NFL Draft Bible has the Vikings addressing the future at quarterback by selecting Florida quarterback Anthony Richardson, who is entering the 2023 Draft after three years with the Gators. He became a starter for the first time in 2022.

This season, Richardson passed for 2549 yards, 17 TDs, and 9 INTs. However, his production through the air is not nearly the most intriguing part of the Florida QB as a prospect. Instead, it’s his ability to extend plays with his legs. Richardson also added 654 yards (at 6.3 yards per carry) and 9 rushing TDs in 2022.

Here is what SI had to say about Richardson as a prospect:

“Sizeable height and length for the position, with an intimidating structure. Overly poised for a player with such little experience. Very comfortable in the pocket and has the instinct to step up when it collapses or escape the impending rush.”

In terms of a prospect, Richardson really is the ultimate project QB. He has terrific arm strength, he can move inside and outside of the pocket, and he is the size of a linebacker. Richardson checks every box in terms of potential for stardom.

However, the accuracy as a passer is a constant concern right now. He doesn’t complete throws at a regular rate, and while his receivers haven’t helped him, Richardson needs to improve this accuracy once he gets to the NFL level.

Because of this need to develop, I’d hesitate to take him in the first-round, especially for a team that needs a QB to step in as the immediate starter. However, if he’s given time to sit behind a starter for a year or even two, the traits are there to become a starter. If the Vikings take a chance on a QB this spring, Richardson is not a bad choice.

So, what do you think, Vikings fans? Should the Vikings go after a QB now, or do they need to wait until 2024? 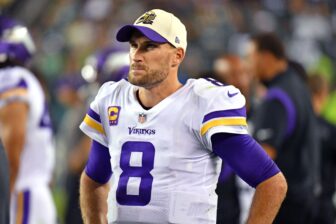 Also Read:
All 4 Teams Playing in Conference Championships Are on the Vikings Schedule in 2023