Week 1 of the college football season got started this weekend. Because of that, this was our first chance to see some of the more highly anticipated prospects for the 2023 NFL Draft class. Unlike the 2022 class, this upcoming spring’s draft class should be chock-full of quarterbacks. The group showed why we should be excited about them, and here’s a quick breakdown of some of the top performances at the QB position from Saturday.

One of the most intriguing parts of this quarterback class is that there are a variety of different playstyles from each one, so you can get your favorite flavor from watching any one of them. Bryce Young stands out because he brings a little bit of everything to the table: a strong arm, mobility, and sharp accuracy.

All of these traits were on display on Saturday against the Utah State Aggies as Alabama trounced them 55-0. Granted, this was not exactly a heavyweight contender, but Young threw for 195 yards and five touchdowns while also rushing for an additional 100 yards and another touchdown. The 2021 Heisman winner got his year off to a great start, and now has a test with the up-and-coming Texas Longhorns this upcoming weekend.

Kentucky got off to a bit of a slow start against Miami (OH) on Saturday, but the Wildcats rode the massive shoulders of Will Levis to a 37-13 victory. The more I watch Levis, the more excited I get thinking about what he could turn into in the NFL. On Saturday, he threw for 303 yards and three touchdowns with 136 of those yards going to senior receiver Tayvion Robinson.

Kentucky does not have a strong offensive line, so Levis is going to be forced to adapt on the fly all year. He got off to a pretty good start yesterday, although you can’t ignore the interception he threw in the red zone. Levis will have to continue to improve if he hopes to be mentioned in the same sentence as Bryce Young and CJ Stroud, but he is making strides towards being a top NFL prospect.

If you didn’t know who Anthony Richardson was before Saturday night, you do now. The Florida Gators went into the 2022 season unranked, but they knocked off the No. 7 team in the country behind some heroics from their QB. The Gators defeated the Utah Utes 29-26 in The Swamp.

At this point in his collegiate career, Richardson is a bit of an unknown as this is his first full year as the starter for Florida despite being in the program since 2020. That said, Saturday night certainly showed why he deserves the job.

He has a fine arm, but Richardson’s abilities as a runner are what make him a threat on the field. This was on full display on Saturday night as he rushed for 109 yards and three touchdowns on top of his 168 yards of passing. This upcoming Saturday’s matchup between Levis and Richardson will be extremely fun to watch.

Of all the QBs on this list, Stroud certainly had the quietest game, but he also had the biggest test by going against Notre Dame’s defense. This test got even tougher when star receiver Jaxon Smith-Njigba went out with an injury early in the game.

Even still, the Buckeyes QB was patient and made some very nice throws in Ohio State’s victory over the Irish, 21-10. There were a few accuracy problems throughout the night, but I think we can chalk much of that up to this being the first game of the year as Stroud nearly 72% of his passes last year. At the end of the day, a stat-line in which he completed 24-of-34 passes for 223 yards and a pair of touchdowns is nothing to scoff at.

It took a little longer than anticipated to get the season started as BYU and USF sat through a 2 1/2-hour weather delay, but it took just 11 seconds for BYU to get into the end zone for the first time. The Cougars rattled off 38 unanswered points, and while they got a lot of help from the running game, Jaren Hall played a very strong game as well.

Like Levis, Hall had a bad interception in the red zone, but that was the only blemish on his game on his way to 261 yards and a pair of touchdowns through the air. At this point, Hall seems unlikely to be picked in the first round of the 2023 draft, but if he continues to string together strong games like this against greater opponents, it will get harder to argue against it. He’ll get his first chance at one of the top dogs next weekend as BYU takes on Baylor. 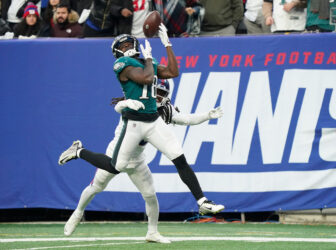