The Tiers of Fantasy Football WRs

Fantasy football drafts are right around the corner, and because of that, we here at Purple PTSD are putting up tier rankings of every position group. Thus far, we already have rankings including 35 QBs and 50 running backs. Today, we discuss the wide receiver position, and here are my selections for the top 50 fantasy football receivers in the NFL this season.

If you find yourself in a situation where you have a receiver on bye, and don’t trust your bench for whatever reason, there’s a good chance these guys are available in your waiver wire. Given the nature of their offenses and quarterbacks, any of these players could put up big scores in a given week. Just make sure they aren’t on bye as well, considering many of these players are WR3 for teams with other players in higher tiers.

Many of these players have gotten off to slow starts to their career. Sometimes they were buried on the depth chart, or maybe their QB situation wasn’t ideal for putting up big numbers. At any rate, they find themselves in big roles heading into 2022 with chances to break out.

Personally, I’d keep an eye on Gabriel Davis out of Buffalo. After a very quiet regular season, Davis broke out in a massive way during the playoffs. Most notably, he had four touchdowns in the game against the Kansas City Chiefs. If he keeps his production up, 2022 could be a massive leap for the third-year receiver.

In this tier, you’ll find players that have all the potential in the world to go over 1000 yards, but they could go a month or more without a touchdown. Personally, I value touchdowns over yards from my receivers and running backs, so I would tend to avoid these players in the first couple rounds. As a WR2, though, these guys are all able to answer the bell.

To get specific, Brandin Cooks has quietly been one of the more productive receivers in the NFL throughout his career. With him being the far-and-away WR1 in Houston, and Davis Mills entering his second year as a starter, we could see some big numbers out of Cooks once again.

This group includes four types of players: those coming off injury, rookies entering WR1 or WR2 roles, and veterans with new QBs, and DeAndre Hopkins. Obviously, Hopkins is suspended for the first six games of the season, so it will be about a month and a half before you can take advantage of his production.

That said, Hopkins will be one of the best receiving threats in the league when he comes back for the Cardinals. It will be a tough bullet to bite early on, but you will reap the benefits of a clear WR1 when he comes back. Feel comfortable taking Hopkins pretty early on in your fantasy football draft.

Like I said, I value touchdowns out of my fantasy football players. If a player is a threat in the red zone, it can make up for a fluky week where they don’t get a ton of touches. That said, most of these guys should also get a large share of the targets on a week-to-week basis.

In particular, Adam Thielen is one guy that I try to get on my teams every year. Since 2020, he is tied for the third most touchdowns in the league with 24. He even missed four games during 2021 and still put up nine scores on the year. With Justin Jefferson on the field, he won’t rack up 100+ yards on a weekly basis, but he is always a threat for a touchdown or two.

This is the cream of the crop in the wide receiver position. These guys not only answer the bell when it comes to being scoring threats, but they also could put up 10+ catches and 100+ yards on any given week, regardless of the matchup. These seven players should be the first seven receivers off the board in your fantasy football draft, and if they’re on the board, take them. 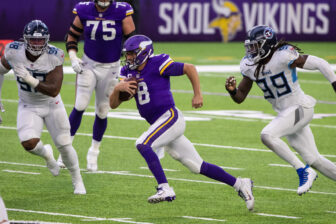