The State of the Vikings: Week 14

The State of the Vikings: Week 14

This is Episode 174 of VikesNow, a YouTube channel devoted to daily Minnesota Vikings analysis. This episode examines takeaways from the Vikings win over the Jets and a preview of Week 14.

Particularly, Kirk Cousins’ health, the wacky nature of the Jets game, and the Detroit Lions are discussed.

The State of the Vikings: Week 14 — Watch Below

The Vikings defeated the New York Jets, 27-22, in a playoff-style game at U.S. Bank Stadium in Week 13. Minnesota started hot on defense, fell asleep on offense and defense in the 3rd Quarter, and rallied back in the 4th Quarter to win the team’s ninth one-score game of 2022.

Wide receiver Justin Jefferson recorded 7 receptions, 45 receiving yards, and 1 touchdown, grabbing the one paydirt at a time when the Vikings desperately needed points. Jefferson is now on pace for 1,809 receiving yards and 10 touchdowns.

The Vikings are 2.5-point underdogs on the road against the Detroit Lions in Week 14, a team that bashed the Jacksonville Jaguars on Sunday, 40-14. The Lions offense is sometimes pretty nifty, but Detroit’s defense is awful.

The Packers won in Week 13, a road triumph against the Chicago Bears. But the Packers, Lions, and Bears playoff hopes are all but vanquished. The Vikings are the No. 2 seed in the NFC behind the Eagles and would host a home playoff game versus the Seattle Seahawks if the playoffs started today.

Health should improve on Minnesota’s roster as the team expects starting cornerback Cameron Dantzler to return from an ankle injury this weekend. Dalvin Tomlinson came back against the Jets from an extended calf-related absence and quickly thrived. Christian Darrisaw could return, too, while cornerback Akayleb Evans is out due to a concussion.

A 1-4 or 0-5 record the rest of the way would plop the Vikings in the postseason. Of course, winning the division is preferred, but subpar football, as a worst-case scenario, would net a playoff berth. That’s the perk of a 10-2 start. The Vikings have a 99% probability of reaching the postseason, per FiveThirtyEight. They can wrap up the NFC North with a win against Detroit.

The Vikings have won 9 of the last 10 matchups against the Lions. 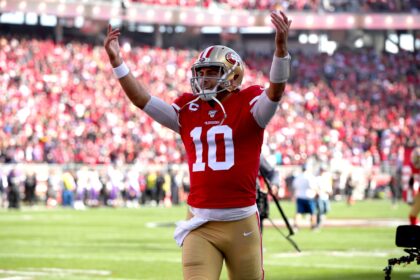 Also Read:
Well, the Vikings May Run into Jimmy Garoppolo After All