Ranking the North: A Youth Movement at Offensive Tackle

By Josh Frey   |
Minnesota Vikings offensive tackle Brian O'Neill (75) readies at the line of scrimmage in the third quarter during an NFL football game against the Chicago Bears, Sunday, Dec. 20, 2020, in Minneapolis. The Bears defeated the Vikings 33-27. (AP Photo/David Berding)

There are few positions in the NFL as valuable as the tackle spots, especially on the left-hand side. Each team in the NFC North has devoted massive resources towards making sure their QBs blind sides are protected. That said, which NFC North team comes out on top in terms of their talent levels bookending the offensive lines, and where do the Minnesota Vikings land in the hierarchy?

The single-best left tackle in the entire NFL may reside in Green Bay. David Bakhtiari missed the conclusion of the 2020 season and much of 2021 with a torn ACL. The Packers are approaching cautiously with their 30-year-old All-Pro, but assuming he comes back at 100% this year, it’s a level of talent that is hard to beat in the entire NFL, let alone the NFC North.

As for the other side, there is a bit of competition. Elgton Jenkins is one of the most versatile offensive linemen in the entire league, playing at both tackle spots, center, and left guard in his career. There’s a chance he ends up at right tackle in 2022, and if that happens, then the Green Bay Packers will once again have one of the best pass-protecting groups in the entire NFL at their offensive tackle spots.

Brian O’Neill is a terrific right tackle for the Minnesota Vikings, and he remains one of the most underrated players in the entire NFL. Not only is he a terrific pass protector, but even further than that, he is a huge reason why the Vikings are able to pull off outside rushes with Dalvin Cook. He opens up massive lanes for the star RB to burst through. This is the final year before his massive extension officially kicks in, making him one of the most valuable players on the Vikings roster.

On the opposite side, Minnesota invested a first-round pick in 2021 on their presumed left tackle of the future, Christian Darrisaw. He had a bit of an up-and-down rookie campaign, but it closed with some serious promise. As long as he continues making strides forward, the Vikings have a terrific, young group at their tackle spots.

Similar to the Vikings, the Detroit Lions have a proven veteran as well as a promising youngster at their tackle spots. Taylor Decker missed eight games in 2021, but when he is on the field, he continues to be an anchor on the left side of the Lions offensive line.

Then on the right, Penei Sewell continues taking big leaps forward as a NFL player. He was the seventh overall pick in the 2021 NFL Draft, and again like the Vikings rookie Darrisaw, his 2021 season had a few learning curves that he had to get past. The Lions should be in good hands at tackle moving forward.

The Bears are a mess, man. Teven Jenkins was supposed to be their left tackle when Chicago traded into the second round of last year’s draft to select him. Thus far into the spring of 2022 though, the tackle has played exclusively on the right side and even has taken snaps with the backups in practice.

In his stead, rookie Braxton Jones has been taking snaps with the first team. Jones was a fifth rounder out of Southern Utah. He started 11 games at left tackle during the 2021 collegiate season, but I saw him as much more of a project than a plug-and-play type of player early on in his NFL career. The fact that he is getting first-team reps already is a concerning sign for Chicago. 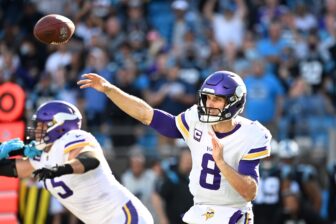 Also Read:
Kirk Cousins Can Get Better in 2022
Share: