The following questions are about current Minnesota Vikings topics, answered by PurplePTSD. Today is the December 6th edition, addressed in a from-the-hip fashion. If you have questions, please email them to DustinBakerNFL@gmail.com.

Q: What is the Vikings top offseason need shaping up as, with the regular season nearing an end?

A: An impact interior pass rusher.

This would be for Jonathan Bullard’s current spot. There is nothing ‘wrong” with Bullard, but the Vikings simply don’t promote a pass rush from Dalvin Tomlinson, Harrison Phillips, or Bullard. The team needs someone who can attack the quarterback from the middle, reducing the load for Danielle Hunter and Za’Darius Smith.

Someone like Bryan Bresee from Clemson would be nice.

Q: With the rumors about Mike Zimmer to Colorado, how do you think he’d do in the college ranks?

You better believe Zimmer would thrive with the Buffaloes, especially with Deion Sanders as his boss. Zimmer will have taken a year off from coaching if the rumors are true and he accepts the job.

He might even catapult Colorado’s defense to a national powerhouse. That’s much of a mastermind Zimmer can be outside his 2020 and 2021 performances.

We fully support and endorse Zimmer to Colorado and hope the deal goes through.

Q: Wait a minute. The Vikings are 2.5-point underdogs against the damn Lions? How?

A: The world doesn’t think the Vikings are as good as you believe.

A 2.5-point home point spread in favor of the Lions even implies oddsmakers believe the Lions are flat-out better than the Vikings (if they were on a neutral field, for example).

One way to avoid complacency is to have the Lions as the favorites when you play them. That’s the silver lining, anyway.

It really doesn’t matter what sportsbooks think. If the Vikings keep winning, oddsmakers and pundits can just continue being wrong about the Vikings. We do not care.

Generally speaking, though — yes, it is weird that Detroit is favored. 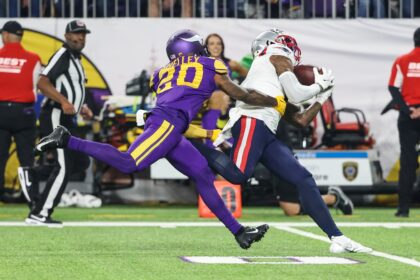 Also Read:
Give Duke Shelley a Ton of Credit for His Great Compete