The following questions are about current Minnesota Vikings topics, answered by PurplePTSD. Today is the December 7th edition, addressed in a from-the-hip fashion. If you have questions, please email them to DustinBakerNFL@gmail.com.

Q: Do you think T.J. Hockenson will treat Sunday’s showdown like a “revenge” game?

Former players of a certain team always hope to shine against their ex-squad. But Hockenson doesn’t sound like he holds any ill will toward Detroit — and probably even enjoys that he left town. The Vikings are winning, and the Lions are not.

Still, this indeed feels like a game where Hockenson could slap 80+ yards and a touchdown on his former team. All athletes crave these former-team moments.

Q: Is Justin Jefferson still favored to win Offensive Player of the Year?

A: No, he’s in a little trouble on that front.

Jefferson will likely have to win the receiving yards crown from Tyreek Hill and Stefon Diggs to win the OPOY award. And last weekend, Jefferson only tallied 45 receiving yards, falling behind Hill by 102 yards for the season-long race.

For now, Hill and Jalen Hurts have better odds to win the award, but a mammoth game for Jefferson at Detroit could again flip the conversation. The award is probably Hill’s to lose unless Jefferson gains on the -102 pace in the next five games. Keep an eye on Hurts, too.

Q: After Greg Joseph’s perfect game against the Jets, can we consider him cured?

A: No, he is a Vikings kicker and thus can never be considered completely trustworthy.

Joseph was indeed flawless against the Jets — an encouraging omen for the rest of the season. Plus, per the law of averages, if Joseph is a good NFL kicker, he should be sitting on consecutive long-field-goal and extra-point streaks. He missed so many to start the 2022 season that he should be mathematically destined to straighten out.

But again, these are Vikings kickers we’re talking about, so who the hell knows? 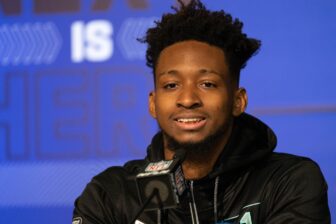 Also Read:
And Just Like That, 2 New Vikings Land on IR