The following questions are about current Minnesota Vikings topics, answered by PurplePTSD. Today is the December 1st edition, addressed in a from-the-hip fashion. If you have questions, please email them to DustinBakerNFL@gmail.com.

Q: Do you think the Vikings will sign Richard Sherman after Andrew Booth’s injury?

We believe the Vikings have faith in Patrick Peterson, Cameron Dantzler, Akayleb Evans, Duke Shelley, and Kris Boyd. In fact, sources tell PurplePTSD that the Vikings have “zero interest” in onboarding Sherman, who analyzes Thursday Night Football for Amazon.

While the idea is interesting, as Sherman can probably still play and the Vikings are headed to the postseason, we don’t think it’ll materialize.

Q: Why is Patrick Peterson involved in a feud with Kyler Murray?

A: On his podcast, Peterson casually mentioned that Murray “only cares about himself.”

Bryant McFadden and Peterson were talking about the state of the Cardinals, and the topic was evidently appropriate enough for Peterson to drop his mini-bombshell.

Murray fired back on Twitter, asserting that Peterson should’ve texted him in a “mentor role” instead of blasting him via nationally-accessible podcast.

Peterson isn’t impressed with Murray’s leadership. He wasn’t afraid to call it out. Murray was offended, or his feelings were hurt. Life goes on.

Q: What is your Vikings-Jets prediction?

The Jets play wonderful defense, but we’re not convinced Mike White is the second coming of Ken O’Brien. Like all Vikings games, the showdown in Week 13 will probably be close, but Minnesota will come out on top, nudging the fancy record to 10-2. 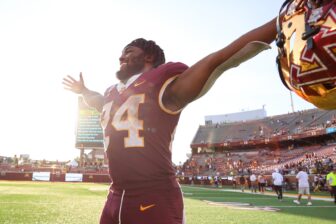