No, the Vikings Don’t Need to Replace Ed Ingram

For the first time in over a decade, the Minnesota Vikings offensive line is playing quality football. Tackles Christian Darrisaw and Brian O’Neill together form one of the best sets of “bookends” in the league.

Meanwhile, left guard Ezra Cleveland, aside from a nightmarish game against the Washington Commanders on Sunday, has continued to grow in his third season. Even center Garrett Bradbury, who didn’t receive his fifth-year option from the team, has improved, ranking 11th overall out of 38 centers in the league, according to Pro Football Focus.

Yet ask most Vikings fans which of the 22 starters worries them the most, and your most likely answer will be right guard Ed Ingram. Ranking 70th out of 77 guards in pass blocking, the rookie second-round pick out of LSU has been on the wrong side of too many “highlights”.

Worse yet, his PFF stats and grades paint the picture of a player that is in over his head. No guard has yielded as many sacks (7) or pressures (31) as Ingram. This accounts for almost half of Kirk Cousins’ 16 total sacks on the season.

I am here to tell you, though, that Ingram’s starting spot is safe and that his best is yet to come. This isn’t going to convince you that he is the next Steve Hutchinson or Randall McDaniel. But this is being written to ease worries that he is the next Dru Samia or Oli Udoh at right guard. After watching him against the Commanders, Ingram continues to show why the Vikings chose him 59th overall in this year’s draft.

When watching Ingram, he flashes every trait that is asked out of offensive linemen. Unfortunately, he isn’t always consistent in displaying this. Most notable is his footwork. It is usually pretty good, but at times, he doesn’t get depth in pass protection. Take this play where Ingram steps laterally as opposed to backwards. In doing so, he invites a move to the inside and isn’t playing over his feet.

That first backwards step, known as a “get off”, is essential. It helps keep a lineman’s weight over his toes, maximizing their power and balance. With his balance off, Ingram gets beat inside, the worst place for a guard to get beat.

However, this isn’t an issue that occurs all game long. In the next clip, Ingram shows much quicker feet.

Because his base is stronger on this play, Ingram is able to counter Daron Payne’s (No. 94) initial punch with his hand placement. By getting his hands and arms back underneath Payne’s, Ingram is able to prevent Payne from long-arming him and dictating his pass rush.

In the NFL, players can’t rely just on brute strength to win one-on-one matchups. This subtle handwork shows that Ingram is coachable and able to adjust on the fly, essential to long-term success in the league.

This next play doesn’t display quite as much physical ability. Instead, it shows Ingram’s discipline and awareness. Washington tried exploiting the Vikings’ line all day with stunts and twists on the defensive line. Payne’s job here is to stunt inside and get Ingram to follow him, theoretically opening up a free rusher up the middle to pressure Cousins.

Ingram doesn’t take the cheese here. He stays square to the line, passes Payne off to Bradbury, and flushes the blitzer out of Cousins’ throwing lane. This play may not look impressive, but had the left side of the offensive line held up, Cousins could have stepped up in the pocket and delivered a more accurate pass.

At first glance, this next clip may not appear to show Ingram in a positive light. He gets a little too tall out of his stance and Payne gets his arms underneath of Ingram’s, potentially spelling disaster.

However, Ingram once again counters and gets his hands back underneath of Payne’s, regaining control as Bradbury comes to his aid as well. Although he played a little too tall at first, Ingram is once again able to stifle Payne’s pass rush.

For this final play, though, we see Ingram once again revert back to his somewhat inconsistent habits. He doesn’t gain any depth on his get off, inviting an inside rush once again.

With his leverage to the outside, Ingram is off-balance and has no power to recover. Notice that on his fourth step when he finally makes contact with Payne that he is lunging, generating little power as he gets easily pushed aside.

This isn’t an issue that happens all the time, and Ingram has shown that he can play with good footwork. But the times that he over-sets are the instances where his man is embarrassing him and wreaking havoc on Cousins.

Ed Ingram has definitely shown some growing pains in his first eight games as a rookie. At times, he seems to get undisciplined with his footwork, leaving himself vulnerable. With PFF stats available to the entire Internet, fans can feel as if they can judge an offensive lineman just by looking at a few numbers.

A closer look shows, though, that Ingram has the tools and ability to fix these issues. For every mistake he makes, he shows five other examples of successfully executing what is asked of him. This isn’t an ability concern for Ingram. It’s a consistency concern. But with nine regular season games to go, Ingram has plenty of time, and ability, to grow into a more consistently reliable guard come playoff time. 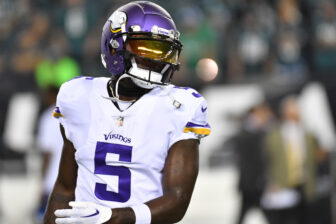 Also Read:
Cowboys/Vikings Won’t Play on SNF After All
Share: