Credit where It’s Due: Ezra Cleveland Has Been Good for the Vikings

Despite some criticism of how Rick Spielman put together past Minnesota Vikings rosters, it’s undeniable that a large part of their talent has come from the draft. Just in recent years, stars like Brian O’Neill, Justin Jefferson, and Christian Darrisaw have been acquired through the draft. Obviously, it’s Kwesi Adofo-Mensah running the show now, so we shall see how future classes pan out, but that’s not the point of today. Today, I want to talk about someone who has gone largely without praise since being drafted by the Vikings in 2020. That player is left guard Ezra Cleveland.

After playing his collegiate ball at Boise State, Ezra Cleveland was viewed as an offensive tackle prospect going into the draft. Because of that, it raised some eyebrows when Minnesota drafted him in the second round despite having both Riley Reiff and Brian O’Neill on the roster. I have a running hypothesis that Vikings fans haven’t given him much of a chance for this very reason.

This became even more apparent when not only did Cleveland not only didn’t win one of the starting spots at offensive tackle, but he struggled in his first season at left guard. Hindsight is obviously 20/20, but these growing pains that he experienced during his rookie season should have been expected.

Cleveland played all 40 of his games at Boise State at tackle, and despite being pegged as having “guard flexibility”, simply having the bare bones to play a position does not necessarily equate to success at the NFL level. It takes time to develop and harness these skills. Keep in mind that throughout training camp, Cleveland competed for a tackle position. There simply wasn’t enough time to develop real guard skills prior to the 2020 season.

This became apparent during the season as Cleveland allowed five sacks, fifth-most among guards in the NFL, even though he played just 622 snaps, the 53rd-most among guards. He did have a respectable PFF grade of 66.2, but the play seemed a lot worse as it was happening live.

A Jump in Quality and Quantity

However, wouldn’t you know it, after a full offseason of training focused on guard rather than tackle, Cleveland was much better in 2021. I would even venture to say that his contract is now the second-most valuable on the entire Vikings roster, behind only Justin Jefferson. Let’s take a look at some of the massive leaps forward that the guard took in his second NFL season.

First off and most importantly, Cleveland managed to stay on the field. He played all 17 games in 2021 as opposed to just 13 in 2020 and didn’t even miss a snap. Cleveland played 1140 snaps during the season, over 500 more than the year prior. If a player is eventually going to be a star, they must play on a consistent basis, and Cleveland did just that.

More improvements happened other than just staying on the field, though. Think of the saying, “quality is better than quantity”. Sometimes as player’s garner a larger role, their quality of play goes down a notch or two. The exact opposite happened for Cleveland. He not only nearly doubled his number of snaps, but he became one of the better guards in the entire league.

This is especially true of his ability as a pass protector. He was one of just five guards to play 1000+ snaps and allow one or fewer sacks, per olinestats.com. The others were Chris Lindstrom, Joe Thuney, Zach Martin, Ali Marpet, and teammate Oli Udoh. Side note: the blemish to Udoh’s number is the fact that he had the most penalties among o-linemen (16).

Looking ahead to 2022, Ezra Cleveland carries a cap hit of just over $1.5 million. For reference, there are 32 guards that nearly double that with hits of at least $3 million. Cleveland certainly proved himself to be among the better guards in the league, and assuming he continues to improve, this value will only continue to go up.

Especially looking at some of the contracts that were handed out to guards this offseason, Cleveland’s contract is miniscule. Even in 2023, he carries a hit of just $1.76 million while the top six guards all make over $15 million. As long as he continues to play at this level or even a tick better, he will be one of the most valuable guards in the league before he hits free agency in the 2024 offseason.

Minnesota, it’s time to give our left guard Ezra Cleveland the credit he deserves. It was a questionable pick when it happened, but halfway through the rookie deal, everything has gone swimmingly for the Vikings. Is he a top-five talent at the position? Maybe not, at least not currently. We’ll see what happens in 2022. However, it’s undeniable that Cleveland’s combination of talent and contract is one of the more team-friendly in the entire league. 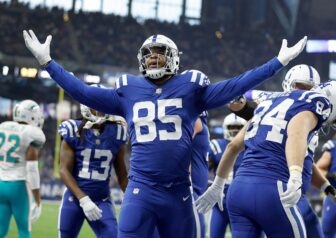