The 2023 NFL Draft is still months away, but even still, it’s never too early for mock draft season. CBS Sports has released their latest mock draft authored by Josh Edwards, and in this mock, the CBS analyst sends the Vikings a LB in the first round of the 2023 NFL Draft.

That linebacker is current Clemson Tiger star, Trenton Simpson. Edwards projects the Vikings selecting him with the 26th overall pick in the draft. Here’s what the analyst has to say about the selection:

Simpson is an elite talent who only fell because of positional value. He has a unique skillset that allows him to fill the common roles of an off-ball linebacker while providing the occasional pass rush as well.

If I were to be honest about this analysis, I couldn’t agree more. In fact, Simpson is quickly becoming one of my personal favorite prospects in this upcoming draft class due to his versatility.

Edwards mentions his unique ability to play as an off-ball linebacker while also being a viable pass rusher as well. This is 100% accurate, and in fact, Clemson has often moved Simpson to the outside linebacker spot and even EDGE on occasions throughout the season.

Despite the significant talent, through nine games in 2022, Simpson’s numbers are down from seasons past. The linebacker has recorded 56 tackles, which is normal, but his sacks are down to just 0.5 sacks so far this year. Combined through 2020 and 2021, he recorded 10.5.

That doesn’t mean he hasn’t been all over the field making as many plays as he usually does. Here’s just one example of his speed and motor coming into play:

Personally, I disagree with Cat Crave. Simpson would look much better in purple.

Simpson’s dip in counting numbers can be very simply explained in another way, too. These sack/TFL stats are being piled up by EDGE Myles Murphy and DL Bryan Bresee, who are on their own torrent paths to the 2023 first round as well. In fact, it would not be a surprise to see both those players go off the board within the first 10 picks.

Regardless, Simpson’s fit within the Vikings defense is clear. Both Eric Kendricks and Jordan Hicks have picked things up after slow starts to the 2022 season, but they won’t be around forever. The Vikings off-ball linebacker duo are both in their 30s, and Minnesota needs to begin thinking about replenishing that position with youth.

Furthermore, Simpson’s versatile skillset tracks with how Kwesi Adofo-Mensah drafted last spring. His ability to play all three facets of the defense (coverage, pass rush, run stop) makes him widely considered to be LB1 in this upcoming class.

The only question remaining is one that Edwards hints at in his write-up. Will organizations value him for his ability or for his position? Oftentimes, off-ball linebackers fall down the draft board because of their position rather than their talent. If this happens again in 2022, there’s a strong chance that he could end up a Viking in April. 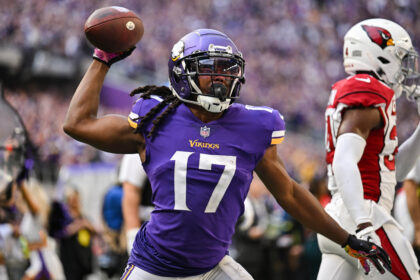