Going into the 2021 NFL season, there was a lot to be excited about if you are a Vikings fan. Danielle Hunter coming back from injury, year two of the Justin Jefferson experience, a young, improved offensive line, just to name a few. Many of those things didn’t really work out, but out of the shadows emerged a fourth-round pick that became one of the more valuable assets that the team acquired ahead of the season. I am of course speaking of rookie safety, Cam Bynum.

Bynum was taken with the 125th overall pick by Minnesota in the fourth round. He was the seventh selection made by the Vikings in the 2021 draft and one of three fourth round selections. The pick was given to the Vikings in a trade made with the Chicago Bears back in 2020 following the Stefon Diggs trade.

Coming out of the University of California, Bynum was a four-year starter at the cornerback position. He led the team in pass defenses over the final three years of his collegiate career. Pro Football Network projected him as a Day Three prospect that “potentially jumps into the end of Round 3”. Seeing as the Vikings got him with the 20th pick in in the fourth round, seems like that evaluation held true.

Cam Bynum’s young NFL career got off to a difficult start in the preseason. A large part of this probably lies in that he was trying to learn the safety position on the fly. After an offseason filled with CB signings including Patrick Peterson, Bashaud Breeland, and Mackensie Alexander. That along with the emergence of Kris Boyd left little space in a crowded CB room.

Because of that, Bynum got pushed into the safety spot, and he had his fair share of struggles early on. This was evidenced by the fact that Myles Dorn had earned a starting role over him by the final exhibition game. The low-point was the 80-yard touchdown against Denver that he had at least partial blame for. Following the preseason, I gave him a very underwhelming C- grade.

The regular season brought a majority of special teams snaps for Bynum early on. Over the first seven games, the rookie played just nine snaps on the defensive side of the ball. Then ahead of Week 9’s matchup with the Baltimore Ravens, Minnesota got back-breaking news that Harrison Smith would be out with COVID.

This unexpectedly thrusted the rookie Bynum into the starting lineup. He did not disappoint. Bynum played all 98 snaps on defense, which is an insane amount, and he played wonderfully. Bynum recorded 12 tackles in the game, and he also had a 27-yard interception.

The following week against the Chargers he again played every defensive snap, and this time he displayed his versatility. Bynum became a blitzer in this game, and he recorded a sack while again showing some nice coverage chops in the secondary. Following the win in LA, he went back to a reserve role with the return of Harrison Smith to the lineup, but his growth was incredible after just a couple months.

Cam Bynum’s Future with the Vikings

There are currently a lot of moving parts on the Vikings defense. There is a chance that Minnesota moves on from a number of veterans, including Harrison Smith. If they do either cut or trade the star safety, that opens up a spot in the starting lineup for Bynum to earn.

Of course, they could also explore a movement back to the cornerback position, especially during the preseason. Minnesota is favored to take a corner during this spring’s draft, but if they don’t, the depth chart also opens up in that spot. Overall, Bynum’s role with the organization is likely set to grow in 2022. Not too shabby for a late-fourth round pick. 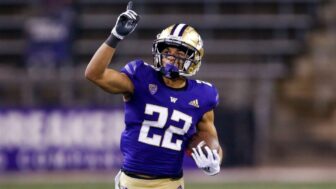