The following questions are about current Minnesota Vikings topics, answered by PurplePTSD. Today is the November 29th edition, addressed in a from-the-hip fashion. If you have questions, please email them to DustinBakerNFL@gmail.com.

Q: The Vikings are going to use another 1st-Round pick on a CB, aren’t they? I can feel it. Especially after the Andrew Booth injury.

A: Nope. That’s just your theory.

Akayleb Evans has about 1.5 to 2 months to proves he’s startable in 2023. Cameron Dantzler is returning to health and is already a starter. And Patrick Peterson has adamantly expressed his desire to retire with the Vikings.

The Vikings need not use a 1st-Rounder on a CB unless someone tantalizing falls to them. Plus, the verdict is still out on Booth. A season-ending injury doesn’t mandate his career is over.

They’ll be fine at corner. Perhaps they’ll invest in a free agent for depth.

Q: Why do the Vikings play so conservatively on defense until it’s time to be serious in the 4th Quarter?

This is the premise of the Ed Donatell defense — don’t let the other team get behind you. As in — no big plays. It is unclear why that stops mattering in the 4th Quarter, but thank God the Vikings defense arrives down the stretch. Otherwise, the 2022 team would be exactly like the 2021 edition.

Someone has to eventually realize that playing four quarters of defense is what Super Bowl-contending teams do. We’re sick of bend-don’t-break, too.

Hopefully, Kevin O’Connell gets the memo.

Q: The Vikings are only favored by three points over the Jets? At home? Feels a bit low.

A: Well, you must understand that most of the NFL world — and sportsbooks — believe the Vikings are an overachieving waiting to tumble. Watching the Vikings get bashed by the Cowboys a couple of weeks ago was music to their ears.

The Vikings don’t anything at an elite statistical level — besides winning. We’ll take it.

But every Vikings win, sans the first one over Green Bay, is a close squeaker peppered with suspense and adrenaline. Why would the Jets outing be any different? That’s the Vegas mantra, anyway.

Perhaps the Vikings will eventually put together a full game and crush someone, but wouldn’t they have done that by now?

Plus, the Jets have the fourth-best defense in the sport. It’ll probably be another close one. 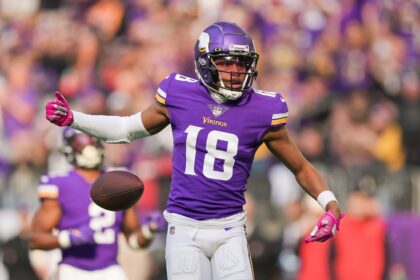