A Look at the College Football Playoff Picture Through Two Weeks

We’re through two weeks of the college football season, and what a wild two weeks it’s been. We’ve seen crazy upsets, wild endings, and downright tomfoolery throughout this young college football season. Because of that, the early picture for the eventual College Football Playoff has become muddled. Today, we’re going to talk through a few of the key teams as we move into Week 3.

Georgia Is the Top Dog

After an absolute demolition of the Oregon Ducks in Week 1, Georgia continued to dominate in Week 2 with a 33-0 win over Samford. Overall, they’re currently outscoring opponents by a ridiculous margin of 82-3.

This defense led by Jalen Carter has not missed a beat after sending numerous starters to the NFL, and it may be even better than last year’s group. On top of that, Stetson Bennett has taken a massive step as the QB of this offense. Georgia is the top team in the country, and it isn’t particularly close.

Keep an Eye on USC

When Lincoln Riley left Oklahoma for USC, it was safe to assume that the Trojans offense was going to be spectacular. This was especially so when Caleb Williams joined him in southern California. That said, 107 points through two weeks, no matter the opponent, is ridiculous.

USC may ultimately be held back because of the weakness within the PAC-12 conference, but if they can beat talented Oregon State and Utah teams on the road later this season, they have to be in the playoff discussion. Keep an eye on the Trojans moving forward.

Will a Big 10 Team Make the Playoff?

As of right now, the AP Poll has a pair of Big 10 teams ranked inside the top-four: Michigan and Ohio State. That said, much of this ranking seems to be reliant on track record through recent history. Michigan has not proven anything to this point in the year, beating up on Colorado State and Hawaii teams that may be among the worst in the FBS this year.

Granted, they’ve done all they can do against their scheduled opponents, but we’ll see if this Michigan team is for real once their Big 10 schedule starts. They have road games against Iowa and Ohio State as well as home games against Penn State and Michigan State.

As for Ohio State, we saw them beat a Notre Dame team that we thought was good going into the year, 21-10, but then Marshall went on the road and beat the Irish. Last week, they ended up beating an Arkansas State program, but in true Sun Belt conference fashion, the Red Wolves hung around before the Buckeyes pulled away in the third quarter. Again, this team could actually be one of the best in the country, but to this point, we haven’t seen much.

At the end of the day, one of these two teams likely land in the CFP, but there is very little room for error down the road. It will come down to their showdown on November 26th.

Obviously, we still have a lot of football to be played before we can truly assess who deserves to be in the CFP. This is simply meant to be an exercise to discuss some of things we have found out through the non-conference schedule. That said, this looks like one of the more wide-open CFP discussions that we’ve seen in some time. It will be very interesting to see which programs emerge as the top-four in December. 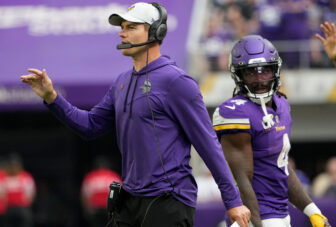