The Minnesota Vikings got their season off to a very strong start with a massive victory over the Green Bay Packers, 23-7. Overall, every facet of the game looked terrific for the team in purple. Justin Jefferson declared he would be considered the best receiver in the NFL by the end of the season, and he backed it up. The Vikings defense consistently put pressure on Aaron Rodgers. Even on special teams, Greg Joseph nailed a 56-yard field goal.

Obviously, spirits are high heading into Week 2’s game in Philadelphia. However, earlier this week, I picked Philly to win this game against the Vikings, and part of that reasoning has to do with a concerning trend for Ed Donatell defenses.

Before we get into the bad, let’s talk about some good. Ed Donatell has helped put together some terrific defenses throughout his career as a defense coordinator. This included last year with the Denver Broncos as that defense ranked third in points allowed in 2021.

Overall, Donatell defenses have ranked among the top-14 in points allowed during seven of his 10 seasons as a DC. During 2020 and 2021, the Vikings went a combined 15-18 while their defenses ranked 29th and 24th in points allowed. If Minnesota can even get their defense to be an average defense by Donatell standards, this should be a playoff team regardless of what happens on Monday night. Keep that in mind as we get into the meat of this article.

As good as Donatell’s defenses have been over the years, there’s one big blemish on his resume: mobile quarterbacks. Especially during his time in Denver, the Broncos had consistent struggles in stopping the run game against mobile QBs. This is an ironic problem to have considering his defenses practiced against one of the most dangerous dual-threat quarterbacks of all-time when he was in Atlanta from 2004-06: Michael Vick.

Even still, you can go all the way back to his tenure with the Green Bay Packers to find struggles against this specific brand of quarterbacks. Take, for example, the Daunte Culpepper era of Vikings football. In eight games from 2000-03 against Donatell’s Packers, the Vikings totaled 150 rushing yards or more six times. They eclipsed 190 yards four times, and Culpepper had 40+ rushing yards four times. Overall, the Packers finished 5-3 against these Vikings, but in true Minnesota fashion, four of Green Bay’s wins were decided by one possession.

Most recently, Donatell’s Denver Broncos had massive problems against dual-threat QBs. Jalen Hurts just last season led the Eagles to a 30-13 victory over the Broncos in Denver. Philly rushed for 216 yards in that game, and Hurts had 55 of them. In fact, the 2021 Broncos were 1-5 in games where the QB had 5+ rushing attempts. They were 6-5 in all other games.

For the Vikings to win on Monday night, they will have to be able to contain Jalen Hurts in the pocket. Part of that strategy may involve putting a spy on him throughout the night. The Tampa Bay Buccaneers did an incredible job of making him a pure passer in their playoff game against him, and it completely flipped that game on its head. Minnesota must be able to do that in order to win this game because Hurts is a threat with his legs.

The Vikings Should Be Fine Long-Term

Overall, even if the Vikings defense gets crushed on Monday, it’s not a reason to panic. The defense should look much closer to the unit we saw in Week 1 on a regular basis. They have five games this season against QBs that ran the ball 70+ times in 2021, and two of them are against Justin Fields and the Chicago Bears.

Additionally, the Vikings have the benefit of Kirk Cousins leading their offense on Monday night; someone who has thrived in Philadelphia throughout his career. This should be an exciting game, and we’ll see if Donatell can shake his trend against mobile QBs with talented players like Danielle Hunter, Eric Kendricks, and Zadarius Smith on his side. 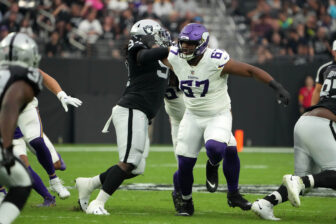 Also Read:
Do The Vikings Have an Above-Average Offensive Line? PFF Article Thinks So