Vikes Plunder the Pats on Thanksgiving and Feast on the Spoils

The Minnesota Vikings beat the visiting New England Patriots on Thanksgiving by the score of 33-26 in another nail-biting, one-score victory. If there was ever a game where the cliché of “righting their ship” was more apt than that one for the Purple (following their 40-3 beatdown at the hands of the Cowboys four days prior), I don’t know what it is. The Vikings, whose season looked over to some last Sunday evening, are now 9-2, no longer dead in the water or listing leeward toward some rocks, and instead are sailing, even surging, toward their playoff destination.

And the entire team pitched in to help head coach Kevin O’Connell beat his former head coach (future Hall of Famer) Bill Belichick and steer the Vikings ship toward calmer waters. But it was not perfect and without peril along the way.

The Vikings’ offense, led by quarterback Kirk Cousins returning to form (30-37 for 299 yards, three touchdowns—and that pesky, bad interception) and an offensive line that gave him time, kept the Vikings in the game when they were down by making strong throws. There was no running game to speak of (something which clearly has to be fixed), so Kirko Chainz reclaimed the glitter in his game and threw the ball around the field to seven different receivers, finding three of them (Adam Thielen, T.J. Hockenson and Justin Jefferson) in the end zone.

But Jefferson was the man. He made nine grabs on 11 targets (for 139 yards) and many of them in dramatic fashion. While none reached the pinnacle of “The Catch” in Buffalo, some approached it, as he was constantly making plays against double coverage and continued on his quest to become the best receiver in the league this season. It will be hard to argue against it when all is said and done at season’s end.

The offensive output was augmented by a great special-teams score—a 97-yard kick-off return for a touchdown by Kene Nwangwu, the third of his career. The Vikings kick team might have benefitted from a couple of non-calls on the run, but all of Purple Nation will let that go as we know that all these calls even out over time (which is what folks benefitting from the calls are wont to say). According to Belichick, the play turned the momentum of the game after the Patriots took the second-half kick-off and marched on an 8-play touchdown drive to take a lead 23-16. The following kick-off was short of the goal line (as they had been all game) and Nwangwu kicked it outside to the left sideline and raced up the field for the big score, erasing the New England lead.

The play appeared to fortify the Vikings defense, which had sprung leaks all game for the Purple. They left too many receivers open over the middle and failed to put any pressure on the young Mac Jones, allowing him (with a get-the-ball-out-quick scheme) to gash the Vikings defense for most of the afternoon. But to their credit, they allowed a field goal on the next Patriots possession and then shut them down completely in the fourth quarter to help preserve the win. (There is the matter of reversed call on a second Hunter Henry touchdown reception—one that I am still amazed was overturned in the Vikings’ favor—but that is a discussion for another time).

The Vikings’ defense began turning up the pressure and finally got to Jones on a couple of sacks to rattle him and help secure the victory. Their contribution came late, but no less timely. Call them “bend but don’t break” if you want, I will call them “patch up the hull and hold on” in rough waters. The defense needs to get some injured players back (Cam Dantzler, Dalvin Tomlinson, and Akayleb Evans) before they can return to their better play of earlier this season.

At the end of the day, the Vikings salvaged what looked like a sinking season at the most opportune time: on Thanksgiving Day in front of a national audience when some fans were jumping ship and looking at quarterbacks in the 2023 draft. For the present, they have forestalled the talk of fraudulence and now can look back at winning two of three from Buffalo, Dallas and New England—three teams likely headed for the playoffs. Surely that builds confidence and allows them to leave the Dallas game further in their wake.

The spoils of their victory was a seat at the Turducken table for Cousins, Jefferson and Thielen, who looked like Vikings of old feasting on their plunder before setting sail for new lands (the New York Jets) to conquer. They will have 10 days to chart a new course to victory over another potential playoff team, and I will have the same to find another metaphor to torture in this amazing and (once again) glorious Vikings season. 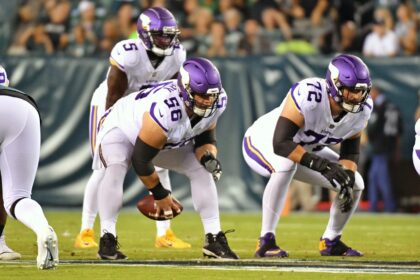