Snagging the win in week 9 didn’t look like it’d materialize for the Vikings. Nay, the Commanders seemed to be in a position to climb to 5-4, largely because of a dominant effort from their defensive line and an unfortunate collision between Camryn Bynum and the official.

Thankfully, Kirk Cousins once again put together a game-winning drive. Even that, though, is a touch too simple. MN was down by 10 points in the 4th until both the offense and defense stepped up. In so doing, Cousins and the Vikings helped to push themselves to a massive lead in the NFC North as they compete for the conference’s top spot.

1) The triple pick almost changed the game. At the end of the opening half, Cousins threw an interception on a throw to Justin Jefferson. Folks, we shouldn’t be upset about this mistake. In fact, we should be encouraged. It was a critical moment in the game and Minnesota’s QB1 gave his best receiver a shot to come down with the ball. I love the willingness to go for it.

The great play by Washington kept points off the board, meaning it was a 7-3 game at the half. To begin the second half, Taylor Heinicke threw a football that Bynum could have picked. On his way to get the INT, though, an official set a pick akin to a basketball player trying to get Steph Curry some extra room for a 3-point shot (in fairness, it was accidental). The pick from the official may have prevented the pick from Bynum. Thus, we have a triple pick: one from Cousins, a missed one from Bynum, and a basketball one from the official. The result: a 10-7 Commanders lead.

3) I know the kicks weren’t the most difficult, but still good to see a perfect day for Greg Joseph. He nailed his extra points and field goals, making him a pristine 4/4 on the day. Build off of that effort as the games get more challenging in the coming weeks. The team will need their kicker to be better down the stretch.

4) I certainly didn’t anticipate such a great performance from T.J. Hockenson. Perhaps defenses will adjust and start to take him away more, but the TE was critical to the Vikings getting a win in Week 9. He turned his 9 targets into 9 catches for 70 yards. Cousins already has a lot of confidence in the former Lion. Like many others, I’m hoping Hockenson and Jefferson can be a nightmare to cover for years to come.

5) Danielle Hunter picked up a pair of sacks yesterday. Za’Darius Smith almost had one, but it got called back due to a face mask penalty. Smith still stands at 8.5 for the year and Hunter is now at 5, giving them a combined 13.5 sacks. So, they’re still a touch below the pace for my predicted 30 sacks, but we’re making progress.

6) Hopefully, Dalvin Tomlinson can get healthy soon. He is a difference maker against both the run and the pass. Ed Donatell’s group is improving. Having a fully healthy defensive line will make corralling Josh Allen easier.

7) Well done, Akayleb Evans. He ended up playing 45 snaps on defense, which was 70% of the team’s total. His PBU while covering Terry McLaurin on the crossing route was clutch. McLaurin is an excellent receiver and that’s a very difficult route to cover. Partner that play with the great tackling and it’s safe to say the rookie had the most impressive game of his NFL career. It’s possible the Vikings don’t walk away with the Week 9 win if the rookie corner doesn’t step up.

8) We saw some classic Eric Kendricks out there. He appears to be playing faster since the bye. When he’s on, he can cover the flats and get into the backfield with regularity. Nullifying the effectiveness of the passes to the flats would really push this defense higher. 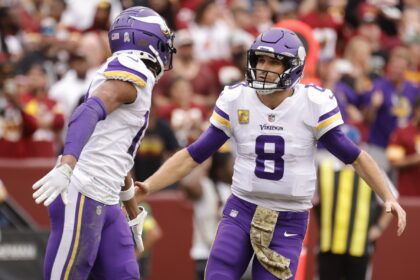