The Plan for Ed Ingram is Becoming Clearer 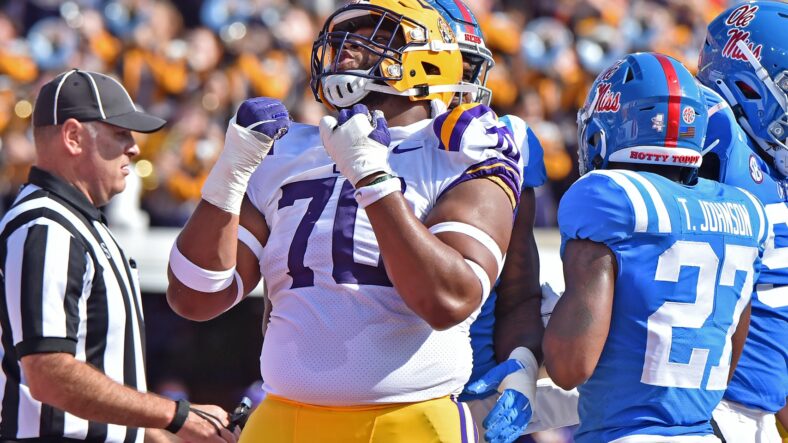 The decision to draft Ed Ingram wasn’t without controversy. Even if we overlook the off-field concerns, many football evaluators suggested Ingram could have been available later in the draft. The Vikings, quite evidently, weren’t overly concerned with what others thought. They chose Ingram 59th overall, making the LSU guard a second-round selection. Being chosen so high as an interior lineman suggests that the team believes he can become a starter.

Coming into the season, my belief was that Ingram would be the team’s main backup at left guard. According to the PFF draft profile, Ingram didn’t have any snaps anywhere on the offensive line other than LG over the past three seasons. A lot of prospects get shuffled around in college, but Ingram had zero snaps in every OL position apart from LG. For this reason, I assumed that the team would look to Ingram as a depth player behind Ezra Cleveland.

Ben Goessling of The Star Tribune recently commented on the competition: “either Jesse Davis, Chris Reed or rookie Ed Ingram will be the Vikings’ 18th different player to start at guard since 2016.” Even though we know that things haven’t gone particularly well at right guard, it’s still astonishing to see that the team has had so many players take snaps at the position over these past years. Hopefully, the man who wins the starting spot this season can hold onto it for a while. The sense one gets from the Goessling piece is that Jesse Davis is the favorite to win the starting spot.

Offensive coordinator Wes Phillips suggested the rookie is making progress but still has room to grow: “Ed Ingram is doing a nice job. There’s just some things as a rookie, it’s going to take you a minute to get the techniques that we’re asking.” Flipping from the left side to the right side can be a difficult adjustment, especially as one is beginning his NFL career. Ingram certainly will need some time to learn what the coaches are teaching him.

Another detail that’s notable is that Wyatt Davis isn’t being mentioned much. Perhaps the 2021 third rounder can still make the team, but he appears to be far down the depth chart. We’ll see if he can still get onto the final roster.

Whoever snags the RG job will get the benefit of partnering with Brian O’Neill, one of the game’s best right tackles. In theory, that ought to make life easier for the player who wins the competition. Ed Ingram isn’t the favorite, but he has a legitimate chance to find himself on the field when the Packers come to town in Week 1.