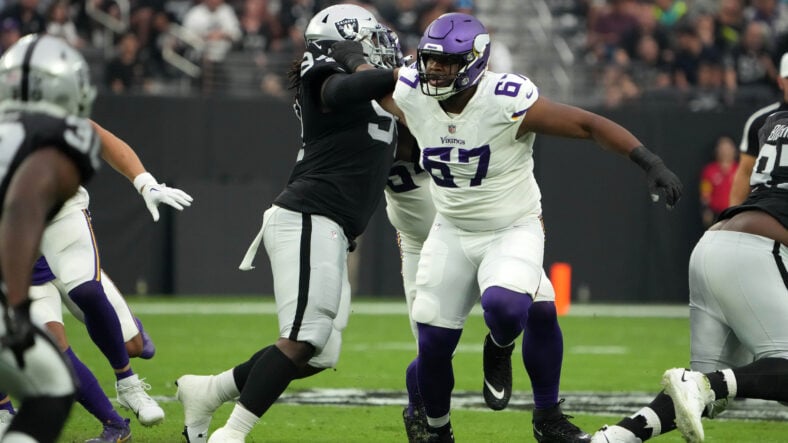 Ed Ingram is in a tight race with Jesse Davis for the starting right guard spot. I certainly didn’t foresee this. I was leaning pretty heavily toward Chris Reed as the Week 1 starter, but it currently looks like it’s between the rookie and the veteran Davis.

Ingram’s first preseason opportunity seems to have further solidified his case for the starting job.

Recently, Ed Ingram has received more opportunity with the first team. The performance against the Raiders may prompt the coaching staff to give the rookie more chances.

The second play in the above video involves Ingram climbing to the second level, positioning his body between the defender and the runner. In so doing, he allows Ty Chandler to get a large gain. Being able to consistently pick up a linebacker several yards down the field is a major positive for any interior offensive lineman.

Now, we’ve still got a long way to go. Putting together a lot of great reps in one’s first preseason game is obviously an encouraging sign, but there’s still plenty that needs to happen. This week, the Vikings will host the 49ers for several practices. How does Ingram do in these practices? More importantly, how does Ed Ingram do in the upcoming 49ers preseason game?

Minnesota fans have long been concerned about their offensive line. The continued growth of Brian O’Neill and strong rookie season from Christian Darrisaw inspires hope among many. The interior of the offensive line doesn’t appear as strong. Ezra Cleveland is capable of being a strong player at left guard. It’s at center and right guard where there is more uncertainty.

The Vikings, in all likelihood, will play more of their starters during this next game. One wonders if we’ll see Ed Ingram get the chance to join the rest of the 1s along the offensive line. If that occurs, fans will get another opportunity to see if the rookie can become Minnesota’s Week 1 starter. The Packers will feature Kenny Clark at defensive tackle, so whoever gets the job beside Brian O’Neill will have a challenging day.