Justin Jefferson Has a Simple Goal in Year Three

Over his first two NFL seasons, Justin Jefferson has turned heads with how quickly he has developed into one of the most dynamic receivers in the league. It couldn’t have been a better outcome for the Minnesota Vikings as a result of the Stefon Diggs trade. Not only has he taken over the Vikings offense, but he broke rookie records, and cracked 3000 yards faster than anyone else.

As he continues to exceed expectations and sprints past milestone after milestone, one might think it would be difficult to find goals and stay motivated year after year. Not for JJ, though. For him, the goal is simple, and he discussed it with CBS Sports’ Jordan Dajani: “Become the best receiver in the league. If that’s not already the case.”

Over his young career, the Vikings have really relied on Adam Thielen to be that red zone threat, but when Thielen got hurt in Detroit last year, he scored four times over the final six games. One of those games where he didn’t score was in Green Bay when Sean Mannion was the starting QB.

Obviously, Cooper Kupp won the triple crown last year, leading the league in receptions, receiving yards, and touchdowns, and Deebo Samuel remains one of the most unstoppable players in the league given his ability as a rusher. Right now, I’d say those are the top two, but it’s hard to argue that Justin Jefferson is too far behind. A boost to those TD numbers, say, to 12 or so, and it becomes impossible to say he isn’t on that tier. 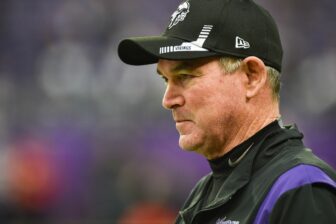