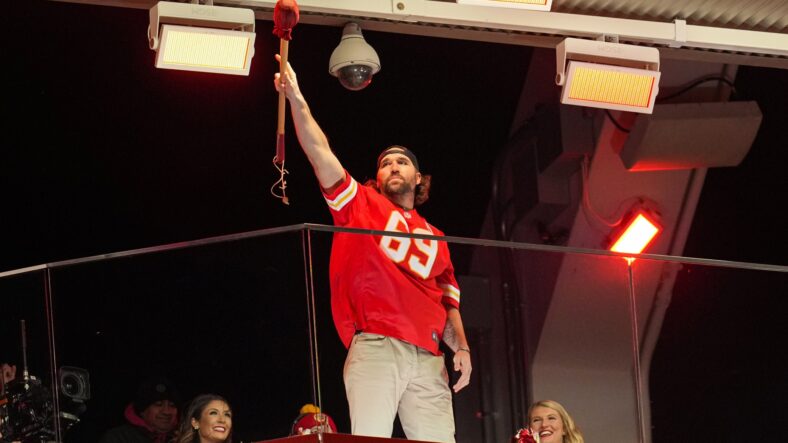 Jared Allen played for the Minnesota Vikings from 2008-2013. In those six seasons, Allen put up 85.5 sacks, 329 tackles, and 104 TFLs. In short, he was an elite player for the Vikings. It makes sense, then, for the Vikings to induct Allen into their Ring of Honor.

After speaking to the team, Allen learned that he’d be the 27th player included in the team’s Ring of Honor, per the team’s website:

Head Coach Kevin O’Connell directed everyone’s attention to the video board for highlights from Allen’s time in Purple. The reel of sacks concluded with a custom graphic that announced Allen’s 2022 induction to the Vikings Ring of Honor.

“You’re looking at the 27th member of the Vikings Ring of Honor,” O’Connell said as the video concluded.

Allen stood stunned by the news for a second before a wide grin overtook his face. The shock resounded as he let out a laugh, hugged O’Connell, removed his ball cap and ran his left hand over his head until it reached his flowing mullet.

The same piece on Vikings.com goes on to highlight a few notable accomplishments: “Allen spent six seasons with the Vikings (2008-13) after he was acquired in a trade with Kansas City. He earned three First-Team All-Pro honors from The Associated Press and four Pro Bowl berths with Minnesota.” Shortly thereafter, the piece describes Allen’s elite sack production: “During his Vikings tenure, Allen averaged .89 sacks per game played (85.5 sacks/96 games), the highest average in Vikings history. Allen was a cornerstone for three consecutive Vikings defensive units that ranked in the NFL’s top 10 from 2008-10 (Nos. 6, 6 and 8). Allen was acquired via trade with Kansas City in 2008 after spending 2004-07 with the club.”

Like many Vikings fans, I spent a lot of time cheering for Jared Allen when he was on the team. Seeing him play alongside Kevin and Pat Williams was always a lot of fun. Combined, those three ensured Minnesota’s defensive line was among the game’s best.

Per the website, the “Vikings will induct former DE Jared Allen into the club’s Ring of Honor during a halftime ceremony of the team’s game against the Arizona Cardinals on Sunday, Oct. 30.”