The Detroit Lions and Minnesota Vikings are two teams that have been sub-.500 for the past two years, but each time they match up, the games always seem to produce entertaining results. In 2022, both teams are looking to show great improvements across the board, and they’ll get an early introduction to each other in Week 3. However, the Lions appear to be short-handed going into that game as Jameson Williams has been placed on the NFI list and will miss the first four games of the season, including the first Lions/Vikings matchup of 2022.

Of course, Vikings fans will remember that Williams is a Detroit Lions as a result of a draft-day trade between the two teams. In that trade, the Vikings sent Detroit the 12th and 46th overall picks in exchange for the 32nd, 34th, and 66th overall picks. Williams arguably could have been the first wide receiver taken in the 2022 NFL Draft if it were not for a torn ACL suffered in the CFP National Championship with Alabama.

Obviously, the Vikings eventually traded again with the Green Bay Packers, but the immediate effect of this trade was that Minnesota drafted S Lewis Cine and LB Brian Asamoah while Detroit got WR Jameson Williams and DL Josh Paschal. While Williams is on the NFI list, Paschall has been placed on PUP, so he will also be out for the first game between the Lions and Vikings.

When the Vikings traded down in the first round of the 2022 NFL Draft with the Detroit Lions, many wondered whether or not that was the right move for a couple reasons. Firstly, it seemed like such a Rick Spielman move that, when it happened, it caught many people off-guard since it was Kwesi Adofo-Mensah running the show rather than Spielman. Secondly, trading within one’s own division is an unwritten cardinal sin in the NFL world.

Considering the injuries and how both Cine and Asamoah have translated their skills to the Vikings defense, the trade seems to have worked out in Minnesota’s favor for now. The only other time this season that the Vikings could see the Lions rookies, barring a playoff matchup, is on December 11th when the teams will meet at Ford Field for a Week 14 battle. We’ll see if either Paschal or Williams are back by then. 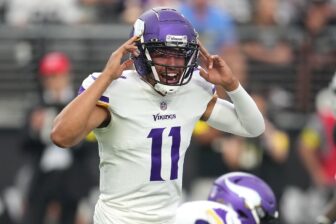 Also Read:
A Look Back at the Third Round of the Vikings 2021 Draft Class
Share: