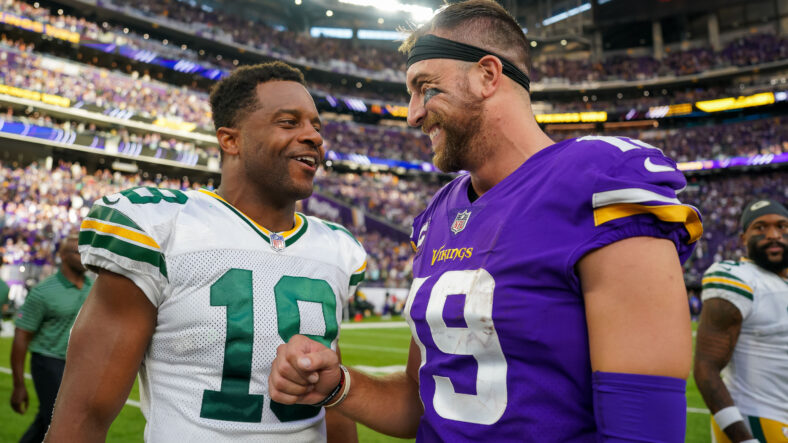 As action winds down at the end of Week 4, and the dust begins to settle, the two teams that we all thought would be fighting throughout the season for the NFC North crown sit atop the division. After winning on Sunday, the Green Bay Packers and Minnesota Vikings continue to reign supreme in the NFC North with 3-1 records.

Green Bay did so by pulling out an OT win against Bill Belichick’s Bailey Zappe-led New England Patriots while the Vikings snuck out of London with a victory over the New Orleans Saints in London.

As for the third horseman in this race, the Chicago Bears, they fell to the New York Giants on Sunday afternoon, thus dropping a game behind the lead pack at 2-2. The Detroit Lions also lost to the Seattle Seahawks in a ridiculous 48-45 shootout, thus dropping to 1-3 and two games behind the leaders.

Of course, the Vikings continue to theoretically hold the lead in the division due to their tiebreaker with the Packers. This came as a result of their Week 1 victory over Green Bay.

Over the next few weeks, this tiebreaker could prove crucial for the Vikings to maintain contact with the Packers. Green Bay has been blessed with a much easier schedule of opponents, especially through October and November. Here is the Packers schedule over the next six weeks along with their opponents’ win-loss record through their first four games:

And here’s a look at the Vikings schedule to compare:

The Vikings and Packers don’t meet again until New Year’s Day at Lambeau Field; a game that all Vikings fans assuredly are dreading. Minnesota must win as many games as possible before that rematch in Green Bay, and it gets started with this week’s game against the Chicago Bears. Not only can the Vikings keep pace with the Packers by winning that game, but Minnesota can establish an even larger gap between themselves and the rest of the division.