If anyone is familiar with ditching the Green Bay Packers, it’s Brett Favre. Favre became an NFL legend during his 16-year career with the Packers where he won three straight MVPs from 1995-97 and helped Green Bay win Super Bowl XXXI during the ’96 season. The Packers also made a trip to Super Bowl XXXII under his lead in the following year.

At the end of his 16-year tenure, Favre retired only to come out of retirement, join the New York Jets, retire again, un-retire again, join the Minnesota Vikings, and… well, you know how the rest of the story goes.

This offseason, another Green Bay star found himself trying to slip his way out of the cheese state. I am of course speaking of wide receiver Davante Adams. Adams led the league in receiving touchdowns during the 2020 season with 18 and has recorded 100+ receptions and 1000+ receiving yards in three of the past four years, making All-Pro teams in 2020 and 2021.

This March, Green Bay traded Adams to the Las Vegas Raiders in exchange for their 2022 first and second round picks. Adams promptly signed a five-year, $141.25 million contract.

Favre spoke out on the matter to TMZ Sports this week, expressing doubts about Adams ability to continue the dominance he has displayed over opposing defenses in recent years:

“I do think that Davante owes a great deal of gratitude to Aaron and the Packers drafting him. That’s not to say he’s not a great player because he is a tremendous player and we’ll see that with Las Vegas…But it’s just hard to shift gears, especially from a player as prolific as Aaron Rodgers. I’d be shocked if he had the same year he’s had this year. That’s not to say he can’t do it, but I would be shocked.”

The truth of the matter is that Aaron Rodgers and Davante Adams were the most prolific duo in the NFL over the past couple years. Rodgers led the league in EPA last year whereas Derek Carr was 15th.

That said, a dip in production for Adams in 2022 wouldn’t necessarily be a bad thing. In fact, an offense where Adams isn’t the overwhelming target could help elongate his prime and overall NFL career. Last season in Green Bay, Adams was looking at a WR room where he was the leading receiver by over 1000 yards. Green Bay’s second-highest receiving total was held by Allen Lazard with 513 yards.

In Las Vegas, Adams will join a well-developed receiver corps that has established players like Hunter Renfrow and Darren Waller. The duo combined for 158 receptions, 1703 yards, and 11 TDs in 2021. In addition, the Raiders also brought in speedster Demarcus Robinson from Kansas City. This quartet should create one of the deadliest air-raid attacks in the AFC this year, and with that Derek Carr should be able to thrive in a way that he never has before.

Overall, Favre may be correct that Adams could see a dip in production in Las Vegas. However, this will be a product of necessity. There are a number of mouths to feed in Las Vegas, but Carr will certainly make sure his former Fresno State teammate gets his touches on a weekly basis. Vikings fans will just be happy to see him doing it in a uniform other than green and gold. 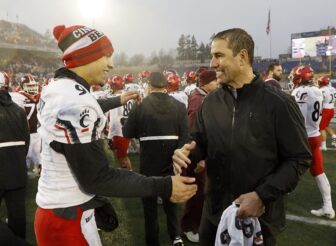