In 2014, the Minnesota Vikings took their team in a new direction by hiring Mike Zimmer as their head coach. The team had struggled under Leslie Frazier, so hiring Zimmer was supposed to help. The first pick with Zim as the head coach was used on Anthony Barr, who is now playing for the Cowboys.

At 30, Barr is getting toward the end of his career. Even still, he’s playing a reasonably large role in Dallas. Per PFF, Barr has played 242 snaps in the box and 63 along the defensive line. He also has 18 in the slot, 8 out wide, and 3 as a free safety.

His 56.1 PFF grade is modest, though not horrible. It’s a number that comes in at 57th out of the 82 who are considered. Back in 2015, he finished at 3rd overall, the best he has done in his career.

The more general stats similarly suggest that Anthony Barr has been having a somewhat average year for the Cowboys. He has 31 tackles, 1 TFL, and 2 QB hits. In the 8 games he has been in, Barr has been involved in 61% of the defensive snaps. QBs have completed 13 of 17 passes into his coverage, though he is holding pass catchers to a modest 6.8 yards per completion.

Recently, Barr has had to overcome an injury, forcing him to miss last week’s game.

Vikings fans will remember that he missed a fair bit of time toward the end of his career in Minnesota. In 2020, Barr was only available for a couple games. In 2021, it was 11 games. Paying so much to a player who struggled to stay on the field became increasingly challenging.

The crazy thing is that Minnesota still has remnants of Barr’s contract on the books. The veteran LB has a $9.89 million dead cap hit. That’s actually the 6th-largest cap hit for individual players, coming in ahead of current players such as Brian O’Neill, Dalvin Tomlinson, Patrick Peterson, Christian Darrisaw, Justin Jefferson, Za’Darius Smith, and Harrison Smith (among others).

In the end, Vikings fans will remember Anthony Barr as a strong player, someone who was capable of doing several things well. He could be a great pass rusher and his length/speed combo made him difficult to block.

Obviously, the game between the Cowboys and Vikings goes beyond just Anthony Barr. Nevertheless, one of the main stories leading into the game will rest in how the former Minnesota linebacker plays.

Heading into the offseason, it soon became apparent that things weren’t going to work out between the Vikings and Barr. He eventually signed a prove-it deal with Dallas, officially ending the chance of him returning to the Land of 10,000 Lakes. At the time, the reports were that it was a $2 million deal with an additional $1 million available. Given that he previously signed a 5-year, $67.5 million deal with the Vikings, it was a notable decrease for the former first rounder.

The game is scheduled to begin at 3:25 CT. At that time, Minnesota fans will get the chance to see their team pursue an elite 9-1 record as they continue to chase top spot in the NFL. It’s fair to cheer for Anthony Barr in the upcoming game, but let’s hope the Vikings still come out on top. 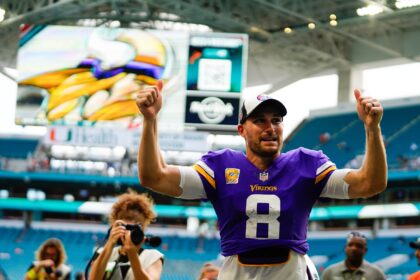