Alas, the USFL Championship Won’t Be a Duel Between Former Vikings

Going into Saturday night’s USFL playoff games, there was a chance that we could end up with a championship game featuring a pair of former Minnesota Vikings quarterbacks: Case Cookus and Kyle Sloter.

Out of the North division, Cookus and the Philadelphia Stars reached the semifinals on the back of a 6-4 regular season record, placing second in the North division. Their QB was signed by Minnesota in August 2021 during the period where COVID ran rampant through the QB room. Cookus spent a grand total of three days with the Vikings during 2021 before ultimately being released.

With his new team, Cookus and the Stars began their playoff run by facing off with the division champion New Jersey Generals (9-1), who beat the Stars in each of their regular season meetings. This time around, Cookus and the Stars turned the tides. Philadelphia was victorious in their third matchup of the season, 19-14.

As a passer, Cookus turned in a very pedestrian performance, completing 10 of 20 passes for 133 yards, zero touchdowns, and an interception. He did reach the end zone on a second quarter run that put the Stars firmly in the driver’s seat, up 10-0. The Generals stormed back into the game during the second half, but some stingy defense and a punt return TD by Maurice Alexander sealed the deal.

On the other side of the bracket and to the delight of many Vikings fans, Kyle Sloter has been dominant with the New Orleans Breakers. In fact, he is considered one of the favorites to win the MVP award at the end of the season. En route to a 6-4 regular season record, Sloter threw for 1798 yards, 9 TDs, and 11 INTs.

Sloter has had three separate stints with the Minnesota Vikings (2017, 2018, 2021) and became well known for absolutely torching opposing defenses during preseason. This time around, it was his defense getting torched. New Orleans faced off with the South division champion Birmingham Stallions. Sloter put together a decent game (327 yards, 1 TD, 2 INTs), but in the end, it wasn’t enough as New Orleans fell 31-17.

With this weekend’s results, only one former Viking remains in the USFL playoff run. Cookus’ Stars will play the Stallions next Sunday, July 3rd. The game will take place at 6:30 PM ET on FOX. 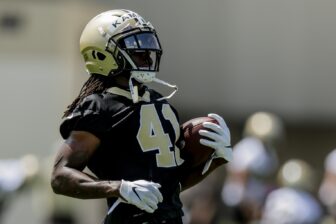 Also Read:
The Vikings Road to the Playoffs May Be Getting a Little Easier
Share: