As part of the flurry of roster moves following Lewis Cine’s injury on Sunday, this week the Minnesota Vikings released one of the cult favorites among Vikings fans: Jaylen Guy Twyman.

When the Minnesota Vikings selected Jaylen Twyman out of Pitt in the sixth round of the 2021 NFL Draft, the biggest surprise was that he had not gone off the board much earlier in the weekend. Prior to the draft, Pro Football Network gave him a second-round grade, and many others projected him to go far higher than the 199th overall pick.

Jaylen Twyman has been one of the prospects that I personally have sang praises for ever since that 2021 Draft. Not only did he come into the league with great potential as a player, but his story makes it impossible not to root for him.

Over the past few years, Twyman’s life as a football player has not come easily. He opted out of the 2020 COVID season at Pitt to be with family. This likely led to his fall down the draft board, and then during the spring prior to the 2021 season, he was shot multiple times while visiting family in Washington D.C.

The injuries forced Twyman to miss his entire rookie season, but he fought his way back for training camp in 2022. Finally, he made his NFL debut this preseason, playing all three exhibition games for the Vikings.

Ultimately, he did not make the 53-man roster, but Twyman performed well enough to start the season on the Vikings practice squad. That’s where he remained until the Vikings cut ties with him this week.

Following Twyman’s release, defensive coordinator Ed Donatello spoke highly of the young defensive tackle on Thursday morning. Donatell stated confidently that Twyman’s story “is not over” and “he will get more shots”.

Indeed, the talent seems to be there for Twyman. At 6’2, he is a bit undersized for a defensive tackle, and even more so at defensive end where the Vikings utilized him in their 3-4 defense. That said, throughout his collegiate career he displayed explosive ability as a pass rusher from the interior of the defensive line. His skillset in college was similar to his mentor’s, another former Pittsburgh Cougar, Aaron Donald.

Donald has carved out a Hall of Fame career despite being a smaller player at defensive tackle. Twyman may not have the ceiling of a player such as Donald, but if he finds a chance in a traditional 4-3 defense, he should be able to catch on somewhere else in the NFL. 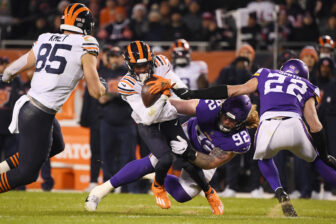 Also Read:
Week 5 NFL Picks: Could the Bears Be a “Trap Game” for the Vikings?