Needless to say, the 2022 NFL season has been a difficult one for Aaron Rodgers and the Green Bay Packers, much to the delight of Minnesota Vikings fans. Not only has the team stumbled to a 4-8 record, essentially being eliminated from playoff contention at this point, but Rodgers has suffered multiple injuries over the course of the year.

Prior to Green Bay’s Sunday Night Football game against the Philadelphia Eagles, which they lost 40-33, news broke that Rodgers had been playing through a broken thumb since Week 5. It seems that throwing a football at an NFL level would be quite difficult with that type of injury, but Rodgers has persevered through that, albeit below the MVP level that we’ve seen from him in recent years.

Then, during that game, Rodgers suffered a blow to the ribs that knocked him out for the rest of the night. Jordan Love then came in and proceeded to complete 6-of-9 passes for 113 yards and a touchdown. With the Packers sitting on the verge of elimination, it would make sense to see what they have in their young QB.

Instead, it appears that Aaron Rodgers expects to play through his multiple injuries this weekend as he stated during his weekly appearance on The Pat McAfee Show that he got some “good news” from his scans.

Rodgers’ reasoning behind playing this week laid in “the competitive greatness” within him that urges him to go out there every week despite the difficult season. Another factor probably involves last year’s declaration of his ownership of the Chicago Bears: the team that Green Bay faces this week. The Packers are scheduled to take on the Bears at Soldier Field at 12 PM CST.

Rodgers’ ability and willingness to play could also be a factor for the Vikings down the road as well. Minnesota is scheduled to take on the Packers at Lambeau Field during Week 17. That game is scheduled for 3:25 PM CST on New Year’s Day. We’ll see if things change over the next few weeks, and the Vikings play against Love or Rodgers. 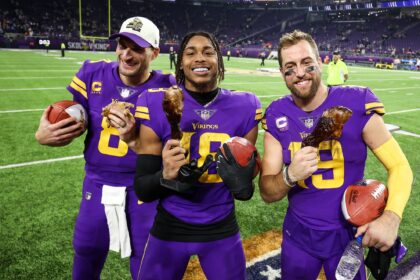