A Missed Kick Saves the Vikings in London 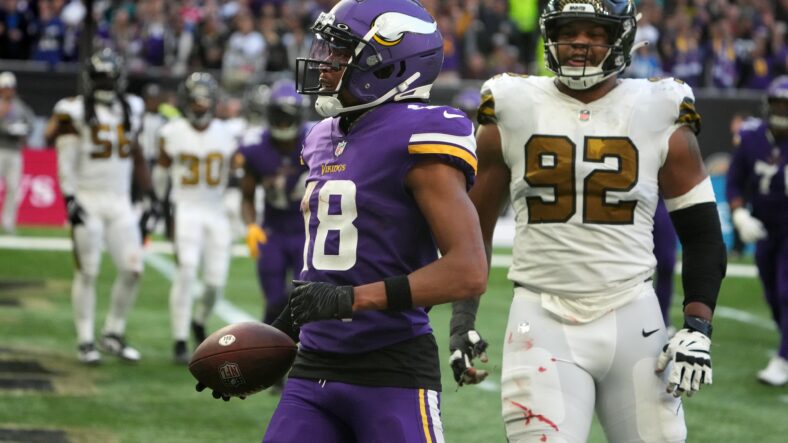 Apparently, NFL curses don’t travel overseas. After a frustrating yet thrilling back-and-forth game between the New Orleans Saints and Minnesota Vikings, the Vikings came out on top after Greg Joseph hit a 47-yard field goal to put the Vikings up, 28-25. Moments later Wil Lutz missed a 61-yard field goal as the double-doink struck again, giving the Vikings a win to improve to 3-1.

The Vikings got off to a very strong start, opening the game with a 13-play touchdown drive that lasted 6:48 and was capped off by a 15-yard pass from Kirk Cousins to Alexander Mattison. While things got off to fast start, the game took a turn for the worst after Lewis Cine was carted off the field with a scary looking leg injury. After being carted off, he was immediately transported to a hospital and was ruled out for the remainder of the game.

Following the injury, it appeared that the Vikings began reeling a little bit. After trading punts with the Saints, Cousins threw an intereption, and Andy Dalton and the Saints struck back with a four-yard touchdown pass to Chris Olave, tying the game at 7-7.

As the Vikings began to regroup, this game quickly became about the New Orleans Saints mistakes. The Vikings had a pair of field goals in the second quarter and took a 13-7 lead into halftime, largely because of an Andy Dalton fumble for loss after being sacked by Dalvin Tomlinson and Harrison Phillips. The fumble set up Minnesota in the red zone.

Ahead of what was supposed to be their second drive of the second half, Deonte Harty fumbled a punt after being hit by Kris Boyd, setting up the Vikings in the red zone once again. Minnesota once again failed to capitalize on the turnover and kicked another field goal, extending their lead to 16-7. One of Minnesota’s biggest struggles this year has been red zone scoring, and that continued for large chunks of this game.

After a Saints touchdown and yet another Vikings field goal, the score sat at 19-14 early in the fourth quarter. After that, all hell broke loose. The Saints scored a touchdown on a Taysom Hill two-yard, and then Dalton came in and hit Jarvis Landry for a two-point conversion. This gave the Saints their first lead since Week 2 against the Tampa Bay Buccaneers.

For the rest of the game, it was the Justin Jefferson show for the Vikings offense. He scored a 3-yard touchdown on a jet sweep, and during the fourth quarter, he had 59 of his 150 yards from scrimmage, including a 39-yard catch to set up Joseph’s game-winning field goal.

For the Vikings (3-1) their win helps them maintain their lead in the NFC North and keep the pressure on the Chicago Bears (2-1) and Green Bay Packers (2-1) to keep up. Meanwhile the Saints (1-3) fall further behind in the NFC South after their heartbreaking loss. Minnesota goes head-to-head with the Bears next Sunday at 12 PM Central while the Saints head back to New Orleans and host the Seahawks.