The Baker Mayfield Talk is a Year Early 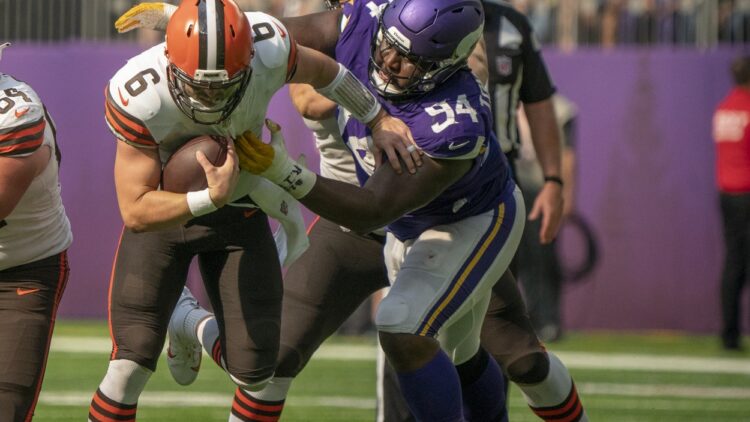 It’s not that the Baker Mayfield to the Vikings theories make no sense at all, it’s that they’re just too early.

During the offseason, Kwesi Adofo-Mensah signed Kirk Cousins to another extension. In so doing, the GM locked in the QB1 for the next couple seasons at a sizeable cap hit. Behind him are Sean Mannion and Kellen Mond, players who don’t inspire a ton of confidence. It makes sense, then, that some are looking at ways to improve the QB2 spot. I need not remind Vikings fans that the magical 2017 doesn’t happen unless Case Keenum – the backup – really steps up when he had his shot to take over.

Nevertheless, the rumblings about Baker Mayfield don’t make a lot of sense, at least not at present. Right now, it looks like Carolina is interested. Going to the Panthers is much more reasonable. Sam Darnold isn’t a QB1, so perhaps Mayfield could be an upgrade as the team’s starter. In so doing, he could set himself up for the free agency period heading into the 2023 season.

The Baker-to-Minnesota ideas are premature. Cousins isn’t going anywhere. We know this because the money demands that he’ll be in Minnesota. Moreover, the entire offseason plan has centered on building the offsense around #8. If he struggles, though, it won’t be at all surprising to see the team find someone else to be their QB in 2023 and beyond. This will be year 5 of Kirk Cousins, so everyone is looking for meaningful team success.

Over the Cap suggests that the 27-year-old Mayfield is playing on the final year of his rookie deal. It comes with an $18.858 million cap hit. According to the traditional stats, Mayfield’s best year came in 2020. He had a 62.8 completion percentage, more than 3500 passing yards, 26 TDs, and 8 INTs. He finished the year with a 95.9 QB rating. These numbers are far from dominant, though they are solid.

For whatever it’s worth, Mayfield finished 8th overall in the PFF QB rankings in 2020. Last year, he dropped down to 30th, but he battled injury all season. His first three seasons in Cleveland had strong grades.

Bringing Baker Mayfield to town in 2023 would likely need to involve trading away Cousins. Cousins is going to come with a $36.25 million cap hit in 2023. Trading him away would clear $17.5 million on the cap. The team could bring Mayfield aboard as a veteran who could either be a short-term solution or as someone who takes a positive step in a new environment.

Until 2023 arrives, don’t speculate too much about seeing Baker Mayfield in a purple uniform.