Where Do Danielle Hunter And Za’Darius Smith Stack Up Among Pass Rush Tandems? 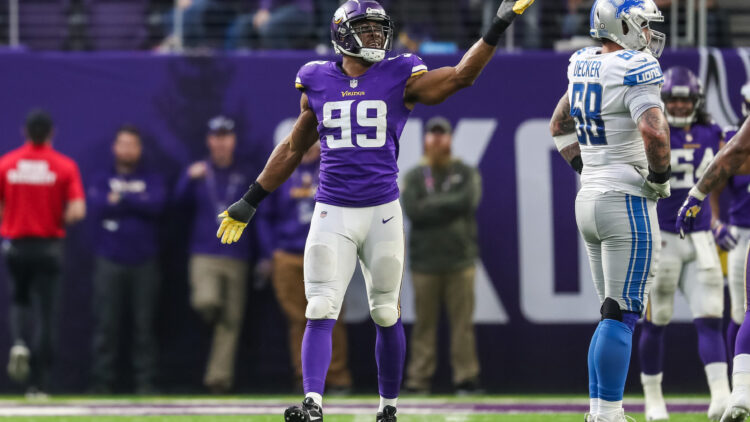 The Minnesota Vikings are running it back in 2022, bypassing a potential fire sale that could have accompanied a new general manager and head coach. Because of this, the Vikings will return many familiar faces. Offseason acquisitions were mostly calculated, under-the-radar moves that didn’t lead to “breaking news” segments on NFL Network.

However, the Vikings did make one move that turned heads within the NFC North. They signed ex-Packer Za’Darius Smith to a three-year deal, hoping that the two-time Pro Bowler could return to his pre-injury form.

Smith missed all but one game in 2021 due to a back injury. In his first two seasons as a Packer, though, he racked up 26 sacks and was a leader for the NFC runner-ups (that’s not a shot, Packer fans). Pairing Smith with seven-year veteran Danielle Hunter could be lethal. That is, of course, if Hunter can recover from his own injuries.

Hunter’s 2020 season ended before it began when he suffered a serious neck injury. He rebounded spectacularly in 2021, notching six sacks in seven games. Unfortunately, he tore his pec, missing the final ten games of the season.

This puts the Vikings in an uncomfortable position. When healthy, Smith and Hunter could be a sensational pass rushing tandem that sets the tone for a secondary peppered with young players. But if one of them suffers a setback, defensive coordinator Ed Donatell will have to find ways to manufacture pressure much like Mike Zimmer did in 2021.

It’s May, though. We have three-and-a-half months before our beloved Vikings rip our hearts out. Why not dream while we have the chance? When healthy, how do Smith and Hunter stack up against other pass rush tandems in the NFL?

Fans who are interested in checking out the stats can find all kinds at Pro Football Reference. With that said, the pass rush pairs.

The Super Bowl champs actually featured three great pass rushers during their run. Von Miller left for Buffalo, but the Rams still have Leonard Floyd on the other side of the line and the best defender in football inside.

Floyd never lived up to his top-10 draft status in Chicago. But since coming to LA, he has been effective, totaling 20.0 sacks over the past two seasons in the regular season. He’s produced in the big spots, too, getting to the quarterback twice in both the 2020 and 2021 postseason. As a complementary rusher, you can do a lot worse than Floyd.

Of course, it’s easier to rush the quarterback when the offensive line’s focus is on Aaron Donald. The star defensive lineman has terrorized both the run and passing game since entering the league in 2014.

Despite lining up inside as a 3- and 5-techique for most of his career, Donald has piled up 98.0 sacks. In 2021, Donald picked up 12.5 sacks in the regular season. He then picked up 3.5 sacks in four playoff games, including 2.0 in the Super Bowl victory. Honestly, Donald should have won the game’s MVP award, but offense rules in today’s NFL.

There really isn’t too much debate with this one. As long as Donald is on top of his game, Hunter and Smith can’t touch the Rams’ pass-rushing duo.

The other LA team boasts a future Hall of Famer as well. The Chargers acquired Khalil Mack from the Bears this offseason. They will pair him with four-time Pro Bowler Joey Bosa. In six seasons, Bosa has accumulated 58.5 sacks.

Mack, who turned 31 in February, is probably in the back nine of his career. Injuries limited him to only seven games. But, like Hunter, he totaled six sacks. The Bears were 3-4 before Mack suffered a foot injury, and Chicago would win only three of their final ten games.

With quarterback Justin Herbert expected to take another step in his development, the Chargers’ defense could be pinning their ears back to rush the passer in high-scoring games. Begrudgingly, yours truly will have to give the Chargers the advantage over the Vikings here.

Two former No. 1 overall picks bookend the line of scrimmage for Cleveland. However, the two couldn’t be much more different. Despite Pro Bowl bids in his final three seasons with Houston, Jadeveon Clowney has bounced around the league since 2019.

However, Clowney racked up 9.0 sacks in 2021 in his first season with Cleveland. This complemented the dominant Myles Garrett on the other side of the line. Garrett reached the quarterback 16 times, setting a career-high and leading him to his second consecutive first-team All-Pro selection.

While Garrett is one of the top pass rushers in the NFL, Clowney is too inconsistent. At full strength, the Vikings get the nod here.

This one isn’t really much of a debate, but what’s more fun than dumping on the Saints? Cameron Jordan is one of the most consistent defensive linemen in football. On the other side, though, the Saints continue to trot out 2018 bust Marcus Davenport. He got 9.0 sacks in 2021, a career-high for a player that Sean Payton sent two first-round picks for.