So far into the 2022 NFL season, there have been only three, maybe four, teams that have emerged from the pack as the true contenders. Many of the other teams you could draw out a path to the playoffs for, but there are blemishes on their resumes.

15 of the 32 teams in the league right now are 2-2, and only one perfect team stands at 4-0. Obviously, that 4-0 team is the Philadelphia Eagles, who continue to be kings of the power rankings this week. How does the rest of the NFL stack up in comparison?

The most impressive part of this Eagles win is that they took a punch in the mouth early on, and then they bounced back. They haven’t had to face much adversity so far this season, but Philadelphia did a great job of working their way back into this game.

Similar to Philadelphia, the Buffalo Bills had to go through some real adversity on the way to their win. Facing one of the contenders in the AFC, the Bills very much needed this win to keep up with the conference leaders.

Patrick Mahomes showcased more wizardry on Sunday night in Tampa Bay, and the Chiefs only punt of the game came with less than two minutes left. This was an impressive offensive outburst against a tough Buccaneers defense.

Coming out of this game, the main concern is the health of Tua Tagovailoa. As expected, Teddy Bridgewater looks like the starter this week against the Jets as well, but as long as Tua reaches a full recovery relatively soon, the Dolphins should be fine.

After an offseason spent putting together a new offensive line to protect Joe Burrow, things looked bleak for the first few weeks of the season. However, things have begun to click, and Burrow took just one sack in Thursday’s victory over the Dolphins. If they can keep him on his feet, and the defense continues to play well, Cincinnati looks like a playoff team once again.

The Vikings ended up coming out on the right side of a couple late-game special teams plays; something that hasn’t happened very often over the team’s history. Apparently, NFL curses don’t travel overseas. Outside of that, credit to Kirk Cousins for leading a terrific game-winning drive despite a tough matchup with the New Orleans defense.

LA’s offensive line has been shuffling more than my playlist on Spotify recently, and against a strong 49ers defensive front, it proved extremely difficult to protect Matthew Stafford in the pocket. It also would have helped if the defense remembered how to tackle.

Green Bay’s offense still looked very rough for most of this game. If they weren’t playing against a third-string rookie QB making his first NFL appearance, there were many ways that the Packers could have lost this game both in regulation and overtime.

The Chargers almost Charger’d again on Sunday, but once again, they stopped the bleeding just in time to win the game. Obviously, it isn’t a great sign that this team has to win games by the skin of their teeth, but Justin Herbert looked much closer to his normal self after his rib injury. All-in-all, this is still a very talented squad.

If the Ravens had simply kicked a field goal down the stretch of the fourth quarter, we may be having a completely different conversation about this team. We have to keep in mind that the Bills still drove the ball down the field after intercepting Lamar Jackson in the end zone. Perhaps they still would have done that, anyway.

It’s hard to think of a game in the Todd Bowles era where the Tampa Bay Buccaneers got gashed as badly as they did on Sunday night against the Chiefs. Obviously, it’s been a very chaotic week for that team, so this likely doesn’t mean much in the grand scheme of things.

Deebo Samuel broke this game open with a 56-yard touchdown catch and run, and San Francisco’s defense did an outstanding job of turning up the pressure both against Stafford and the Rams running game. So far into the 2022 season, the Niners have allowed the fewest points, tied for the fewest yards allowed, and give up just 3.8 yards per play. If this continues, they’ll be playoff contenders once again.

The legend of Cooper Rush continues to grow as the Dallas Cowboys continue their strong start in 2022. Rush is now 4-0 in his career starts after going undrafted and being cut multiple times.

Hollywood Brown played his best game of his early career with the Arizona Cardinals, catching six of his 11 targets for 88 yards and a game-sealing touchdown. If Kyler Murray can continue to keep him involved, especially as DeAndre Hopkins return looms in a few short weeks, the Cardinals may be poised to make a run soon.

The Jaguars got off to a fast start against the Eagles, but overall, this was a tough day for Trevor Lawrence at QB. He passed for fewer than 200 yards for the first time in 2022, and he completed less than 50% of his passes. We’ll see if he can get back on track against the Texans.

For the first time in 2022, Derrick Henry broke 100 yards rushing by putting up 114 yards and a touchdown on the Colts defense. Additionally, the Titans defense forced a couple turnovers that led to points. If that can consistently happen, it’ll be tough to beat this team.

Las Vegas finally got off the snide and broke into the win column this week against the Broncos. Maxx Crosby and Chandler Jones completely dominated the Denver offensive line, and their prowess on the defense gave the Broncos headaches all afternoon.

Silly mistakes continue to plague Russell Wilson and the Denver Broncos early in the 2022 season, and now they’ve taken a massive loss because of Javonte Williams’ torn ACL. Things look bleak in Denver four weeks into the season.

This was one of the uglier games to watch on Sunday, but the Giants pulled off another win and now sit at 3-1, tied for the lead in the NFC East. Daniel Jones and Tyrod Taylor left the game with injuries at one point, so that is something to monitor moving forward.

This game was supposed to be an exciting moment for the Colts as LB Shaquille Leonard finally returned to the field after his back surgery this summer. The celebration was cut short though as he left the game with a concussion. Making matters worse, Jonathan Taylor also suffered an ankle injury in the loss to Tennessee.

In the wake of Mac Jones’ ankle injury in Week 3, Brian Hoyer started Week 4 against the Packers. However, he also left this game with a concussion, leaving rookie Bailey Zappe to take his first NFL snaps. Overall, it felt like Bill Belichick did not trust him to make plays down the stretch of this game, so we’ll see how that impacts the offense moving forward.

The Falcons got all their playmakers involved throughout the day against Cleveland, including RB Cordarrelle Patterson who rushed for another touchdown this week before leaving the game with an injury. Overall, Atlanta’s offense certainly has the skill to compete, but their defense remains a serious question mark.

All it took was one breakdown by the Browns defense to open the door for the Falcons. Marcus Mariota connected with Olamide Zaccheaus late in the fourth quarter for a 42-yard reception, and at the end of the play, Denzel Ward’s facemask penalty made it a 57-yard play. That left Younghoe Koo with a very easy kick to win the game for Atlanta.

Detroit’s offense continues to look fantastic, so that’s a positive to take away from this game. On the other hand, allowing Geno Smith and the Seattle Seahawks to put up 48 points is not a good sign for this Lions defense. This is going to be a very fun team to watch all season, but how many games can they actually win?

Kenny Pickett finally made an appearance for the Steelers in the second half, and there was a lot boom and a lot of bust. Pickett led Pittsburgh on a pair of scoring drives, at one point helping balloon their lead to 20-10. However, he threw three interceptions as well–two of which came in the fourth quarter–and that allowed the Jets to climb back into the game.

New Orleans went into this game without their QB1, RB1, WR1, LG1, and starting safety Marcus Maye. Even still, Andy Dalton came in and ran a mostly functional offense while the defense kept Minnesota’s offense in check as best as they could. If the Saints ever get healthy, perhaps they can turn into a competent football team yet.

Geno Smith put on a show on Sunday, but it was against arguably the worst defense in the entire NFL. This week, he and the Seahawks take a trip to New Orleans to play the Saints, so Week 5 could be a reality check for this offense.

Baker Mayfield’s struggles running the Panthers offense continued on Sunday against the Cardinals as the QB passed for just 197 yards, a touchdown, and two interceptions. Combine that with Christian McCaffrey getting bottled up in the running game, and Carolina won’t win too many games.

Despite some early struggles in his first game of the 2022 season, Zach Wilson stepped up down the stretch and helped the Jets get back to .500. Breece Hall came up big with his fourth quarter touchdown as well. The future looks bright in New York.

Justin Fields finally broke double-digit completed passes on Sunday, but offense continues to be a weak point for the Bears. This became even more apparent when they couldn’t consistently get the running game rolling.

Houston got down big early, and then they came roaring back in the second half against the Chargers. However, a few more mistakes, and the fact that the deficit was massive to begin with, caused the Texans to fall just short once again. They are the only winless team left in the NFL. 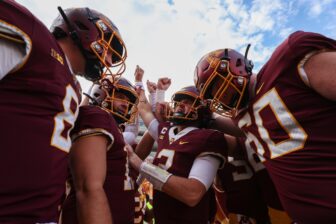 Also Read:
The Gophers Season Is Far from Over