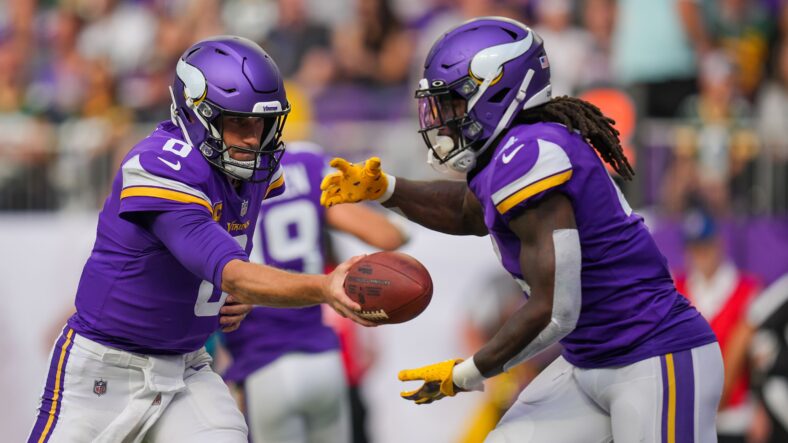 In 2021, one of the few things you could bank on with the Minnesota Vikings was that once they got into the red zone, they were going to put points on the board. Most of the time, those points came in the form of touchdowns. Among all teams in the league, the Vikings ranked 10th in red zone touchdown percentage, getting the ball in the end zone 62.26% of the time.

This success makes a ton of sense. Adam Thielen has been one of the more reliable red zone targets throughout his entire career, including a ridiculous 2020 season in which he caught 13 touchdowns inside the opponents’ 20. In 2021, Thielen’s personal stats took back but that was because both Justin Jefferson and KJ Osborn stepped up in that area. In fact, Jefferson and Thielen were PFF‘s top receiver duo down in that area of the field.

Thus far into 2022 though, that success has dissipated down to nothing. After three consecutive seasons ranking inside the top-10 in red zone TD percentage, the Vikings have fallen all the way down to 26th at the conclusion of their Week 4 game against the Saints. Minnesota scored touchdowns on just two of their five red zone drives this weekend, and on the year, they are doing so just 46.67% of the time.

This is worse than either of the Chicago Bears or New York Giants, and if you watched them play yesterday, you know that neither of those offenses are winning major awards anytime soon.

Granted, some of these struggles have come as a result of the quality of opponents that Minnesota has faced over the course of four weeks. Here is where each of the Vikings opponents have ranked in red zone TD percentage allowed this season:

And here is how the Vikings fared against each of those opponents:

Taking this into account, the only game where the Vikings massively underperformed compared to their opponents’ capabilities so far this season occurred in Philadelphia. The Vikings scored just one touchdown out of their four red zone drives, and Cousins threw multiple interceptions down in this area of the field. Not much went right for the Vikings in any aspect of that game though, so perhaps we should take that with a grain of salt for now.

This exercise does bring a key fact to light, though. Outside of the Detroit Lions game, the Minnesota Vikings have played three very good defenses this year, and they are among the very best in the red zone. Even Philadelphia has been rather good, but their season numbers are being skewed by the Lions game. Over their last three games, they’ve allowed a 40% TD rate, which is third in the league over that time.

Even still, the Vikings are 2-1 in those games and 3-1 overall. For a team with a new head coach and new offensive system, that is rather impressive, all things considered. This should continue to improve as the season goes on as well.

From Weeks 5-10, Minnesota has just two opponents that have stopped teams at a 50% clip in the red zone. Those teams are the Chicago Bears and Washington Commanders; teams that, overall, have been less than inspirational so far this season. The red zone may be a mystery for the Minnesota Vikings right now, but I would suspect it gets solved rather quickly.