PPT: Will Kwesi Adofo-Mensah Add a FA or Two? 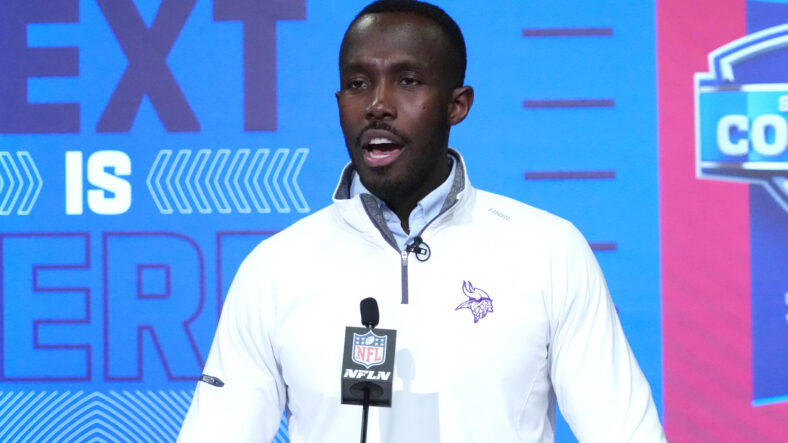 One source of speculation this offseason has been whether Kwesi Adofo-Mensah will look to bring in some more talent. I’ve certainly wondered about some of the options that are out there. The pass rushing depth, for instance, could use some help, as could the tight end depth. Will Minnesota’s GM make an addition or two?

First, a few basics. Over the Cap indicates that Minnesota has nearly $11 million in cap space. That number will change once the final two draft picks sign their deals, but it gives us a sense of where the finances stand. The team will want to keep some room for in-season moves, so don’t assume Adofo-Mensah will want to use up all his cap room. We should also remember, though, that the team has some ways to create more room in their budget if needed.

Spotrac offers a helpful snapshot of the league’s current free agents. Some names – Julio Jones, Jason Pierre-Paul – will catch one’s eye since they’ve have such great careers. Others – Ndamukong Suh, J.C. Tretter – will be notable since they’ve been connected to the Vikings. One thing I’ll add is that fans and writers often see things very differently from NFL executives. The names that appeal to us often aren’t the same names that appeal to folks who are actually in the NFL. So, don’t be shocked if the FA addition is someone we didn’t see coming.

It’s clear that Minnesota is looking to compete in 2022. They’re acting as if they have a chance at snagging the Lombardi. Fans will disagree with whether the team actually has a shot, but there’s no debate that this team is going for it. If that’s the mentality – and it is their mentality – then they ought to give their best effort. What I’m trying to say, folks, is that it would be misguided to opt against a FA who can help now so that the team can save a few million dollars. Planning for the future is prudent, but so too is it wise to seize the opportunity that’s in front of oneself. Minnesota believes it has a chance in 2022, so make it a priority to give a full effort in 2022.

Getting some help along the edge, corner, iOL, and tight end would all make some sense. Even adding a MLB or backup QB has some merit. We’ll see if Kwesi Adofo-Mensah makes it a priority to add someone else to the roster.