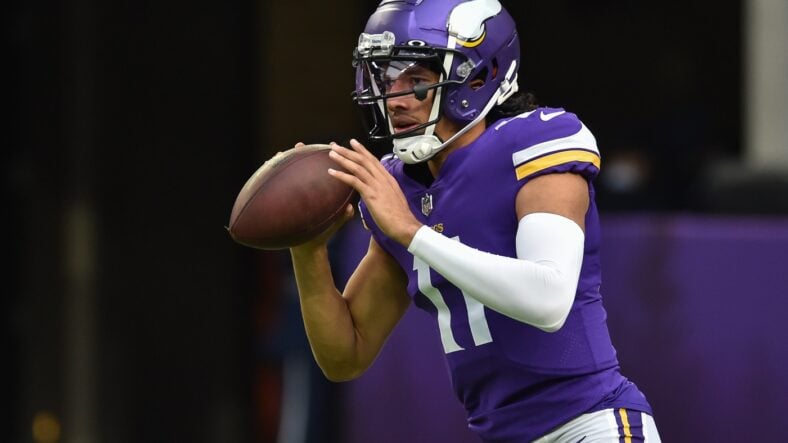 Forced to guess, I’d say Kellen Mond is the QB2 in Week 1.

Now, that’s far from a guarantee. The 2021 third rounder will need to earn that job. He underwhelmed as a rookie, barely getting in on any game action. His lone snaps occurred at the very end of the season. Kirk Cousins was out and Sean Mannion – a veteran with essentially no upside – got the start. Mannion had to leave for a few snaps, leading to Mond’s only opportunity.

The stats are nothing to write home about. He finished his rookie season having gone 2/3 for 5 passing yards. Somehow, those snaps translated to a 21.8 grade on PFF. One would think they’d avoid such a dramatically low score for so few plays, but I’m not in charge of the grading system over there. The takeaway is simply that he struggled to get onto the field and that his three plays did nothing to inspire confidence.

With that all being said, why the belief that Kellen Mond can be this team’s QB2?

The first reason isn’t particularly inspiring, but here it is: there aren’t too many alternatives. Mannion is being kept around because he helps Kirk Cousins prepare. That’s fine when Cousins is playing, but it’s an issue when Cousins isn’t playing. By all means, keep Mannion around the team, but let him be the QB3 or perhaps even a practice squad player.

The second – and more compelling – reason rests in Mond’s potential. There was a reason why he was chosen 66th overall, a top spot in the third round. NFL evaluators were often enthusiastic about Mond, suggesting he has the potential to develop into a good NFL player. The Vikings offense underperformed last season. Klint Kubiak didn’t do a great job as an OC, and Mike Zimmer has received plenty of criticism about how the team functioned toward the end. The point, folks, is that we might be able to forgive Mond’s slow start when we consider the context. Potential remains.

In a perfect world, the backup QB spot isn’t that important in 2022. Cousins can hopefully show that he does belong in the league’s top 10 QBs as he starts every game while leading Minnesota to the playoffs. In that scenario, Kellen Mond can be the upside QB2 who develops on the bench as he pushes the starter to be even better.